Manga Review: What did you eat yesterday? vol. 1 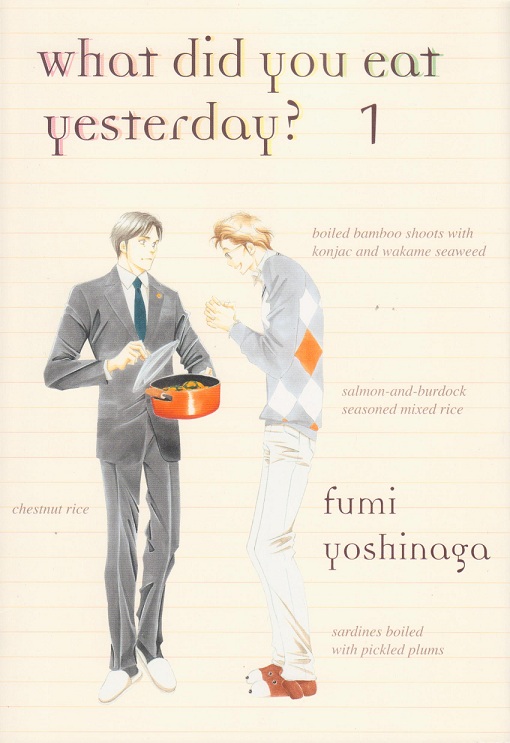 I’m not a big fan of the term “slice-of-life.” It either implies that nothing happens, or at the very least offers an excuse for someone to brush off criticism that nothing happens. That’s not really the case with one of Vertical Inc.’s latest releases, Fumi Yoshinaga’s What did you eat yesterday?, is it? While the manga does follow the day-to-day life of a gay couple—right down to what they eat every day, just as the title suggests—it would be more appropriate to consider it a character study. Your mileage may vary as to whether the study is an interesting one, but at least we can all pick up some solid new recipes along the way.

What did you eat yesterday? follows Shiro Kakei, an older but still very youthful and handsome lawyer who lives with his boyfriend, Kenji Yabuki. The two couldn’t be more different. Kenji is a relatively easygoing hairstylist, while Shiro leads his life more rigidly. He’s very conscious about his status, especially at work, and how the truth about his lifestyle might affect how others perceive him. He’s far from ashamed of being gay, but it’s also something he chooses to keep a bit closer to the vest.

He also happens to be one hell of a cook, and What did you eat yesterday? is as passionate about the meals he creates as the character himself. Even if you never plan on cooking anything based on a list of ingredients and directions given in a comic, the fact that they’re even there in the first place mirrors Shiro’s attitude. He’d rather you take a moment out of following the ups and downs of his intimate relationship with Kenji and, I don’t know, why don’t you just try cooking this and stay out of our business? Occupy yourself with something productive and don’t worry about what we’re doing.

Looking at Yoshinaga’s manga in that light makes it seem more voyeuristic than it really is. Still, as realistically as it portrays the relationships within, sometimes it does seem purposefully guarded. I can’t quite say the first volume gave me enough to chew on to want to continue following the lives of its characters, but there’s growth within these pages. There are some isolated revelations that, though seemingly insignificant on their own, bare a bit more emotional skin than perhaps even Shiro would prefer.

If you’re interested in studies of the sort—or just the work of Yoshinaga, a fascinating manga  creator with credits to her name that include the likes of Antique Bakery and Ōoku: The Inner Chambers, among others—it would at least be worth your while to see if the first volume leaves you hungry for more. The care put into the art and characterizations is as apparent as the care Shiro puts into every single one of his meals.