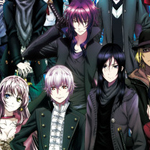 The K: Missing Kings anime film is well on its way for a summer release, with world premieres set for both Anime Expo and Japan Expo, which take place July 3-6 and July 2-6, respectively. After that, the movie will open in Japanese theaters on July 12.