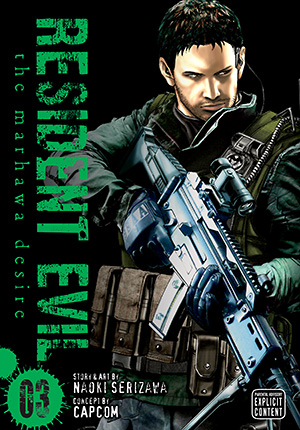 It hasn’t been that long since I read the previous volumes of Naoki Serizawa’s Resident Evil: The Marhawa Desire manga, but volume three would have had me covered either way. There’s practically a novel in the first few pages for anyone who needs a recap, so if for some reason this is your first step into this spin-off series you should have no problem getting comfortable.

At this point the outbreak at the prestigious Marhawa Academy is completely out of control. What started as something school headmaster Mother Gracia hoped to keep under wraps has spiraled into the kind of thing we’ve come to expect from the Resident Evil series, all serving as a zombie-loaded prequel to Resident Evil 6.

Volume three has an especially heavy dose of the more hideously malformed creatures of the series. One of the former students who went “missing” (AKA one of Gracia’s many notorious cover-ups) is now a hulking abomination worthy of the franchise’s bubbling and boil-popping history, and young Ricky Tozawa is pretty much the only person left who can do anything about it. Sounds like the perfect time to insert one of the manga’s big reveals, which sends us back to the recent past before we rocket toward what appears to be an appropriately explosive climax.

There are still a couple volumes to go, and the end of volume three sets us up for more heavy-duty BSAA action lead by the ever-bulky Chris Redfield. Serizawa’s art continues to simultaneously impress and appear sterile; it’s technically fantastic but oddly stiff in places. Still, when it comes to turning modern post-RE4 Resident Evil into a comic, you can’t ask for much more than what The Marhawa Desire serves up. Intelligence-insulting fan-service is at a nice, low level, the action is swift and violent, and enemies are getting nastier. There’s no zombie dog punching in this volume, but it will do for now.