Made in Abyss Gets Compilation Films, New Episode 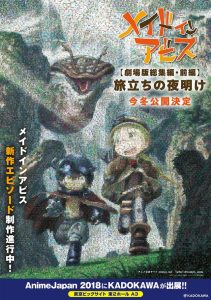 If you didn’t get enough heartbreak the first time around, good news: Made in Abyss is back.

This winter, the series will be recut into two compilation films. The first will be titled Tabidachi no Yoake (The Dawn of a Trip) and the second will be called Hourou no Koukon (Wandering Dusk).

These films are the continuation of Made in Abyss that was first hinted at last November.

It was also announced work is underway on a “new episode.” No further details or release date have yet been announced.

Finally, if you’re in Tokyo from March 19 to 25, you can stop by Kokusai-Tenjijō Station, which serves Tokyo Big Sight, to see a large Made in Abyss poster made up of individual frames from the series. Tokyo Big Sight will host AnimeJapan from March 22 to 25.

Made in Abyss was a 13-episode series that aired from July to September last year. Here’s how Sentai Filmworks describes it:

The “Abyss” is the last unexplored region, an enormous and treacherous cave system filled with ancient relics and strange creatures. Only the bravest of adventurers can traverse its depths, earning them the nickname, “Cave Raiders.” Within the depths of the Abyss, a girl named Riko stumbles upon a robot who looks like a young boy. Tantalized by the Abyss, Riko and her new friend descend into uncharted territory to unlock its mysteries, but what lies in wait for them in the darkness?

You can read our own Joseph Luster’s review of the series here.