Lovelive Movie Teaser Is Up 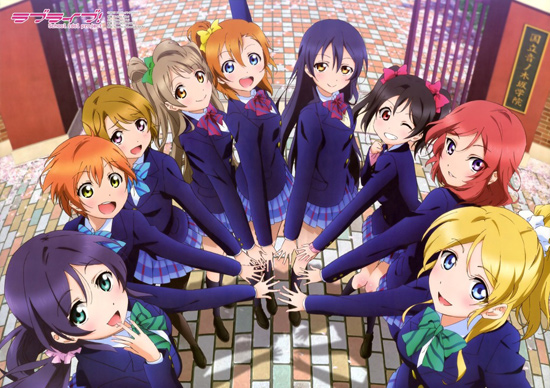 Last time on LoveLive!! …the school idol series, Sunrise’s take on The Idolm@ster, has eclipsed its inspiration in popularity, taken over Japanese otaku culture, and built a strong and growing cult following around the world with a lovable cast, pretty good songs, and kind of awkward CG dancing. This is to say nothing of the wildly successful LoveLive cellphone card game, which uses the most brutal, predatory practices of mobile games to capitalize on the pure and intense love that otaku have for their “best girl.” To put it bluntly, LoveLive is making it rain right now.

So of course there’s going to be a movie! The 15-second spot reveals only the obvious– there will be singing and dancing– and the plot summary hints that a new story waits for μ’s (pronounced “muse”, the idol group from the show) after several of the girls graduate from high school. Well, of course you don’t want something as big as LoveLive ending just cause the girls got too old for it, right? This is 2D, they’re forever young! And Sunrise and Bushiroad have at least five more years’ worth of money to make!

I will bet you now that a month after LoveLive has been in the theaters, there will be a campaign where you go see it three more times and get a minor piece of merchandise. You will look back on this day and see that I was right.

Manga Review: Jaco the Galactic Patrolman
Tell Everyone to “Kill Me, Baby!” With This Otaku Military Parka