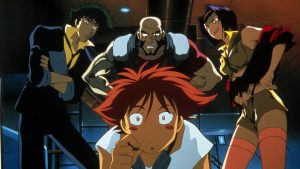 If you were wondering where that previously-announced live-action Cowboy Bebop TV series would end up, we now have the answer. Netflix announced the TV series as a co-production with Tomorrow Studios, with Netflix handling the physical production. The series currently has a 10-episode run planned, and original anime director Shinichiro Watanabe is on board as a consultant.

The first episode will be written by Christopher Yost (Thor: The Dark World, Thor: Ragnarok).

Here’s Netflix’s description, followed by a look at who else is involved thus far:

Based on the worldwide phenomenon from Sunrise Inc., Cowboy Bebop is the jazz-inspired, genre-bending story of Spike Spiegel, Jet Black, Faye Valentine and Radical Ed:  a rag-tag crew of bounty hunters on the run from their pasts as they hunt down the solar system’s most dangerous criminals.  They’ll even save the world…for the right price.