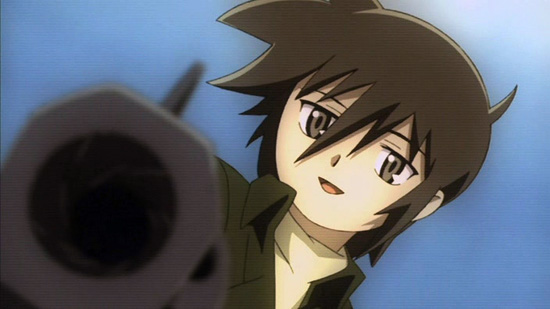 As a reviewer, there’s something magical about finding a diamond in the rough. It’s something a little quirky, maybe something that doesn’t quite have mass appeal at first glance. It usually takes a little getting used to, but once you give it a shot, you find that it’s a really wonderful experience. Things like that practically beg to be recommended, so writing about them is easy! Kino’s Journey, the 2003 anime based on Keiichi Sigsawa’s series of light novels, is that kind of show.

At first, the plot of Kino’s Journey seems inconsequential. Kino is a traveler, moving from country to country on a whim, experiencing the local customs for a maximum of three days each. The most interesting part of this trek through the wilderness is Kino’s trusty steed, a talking motorcycle named Hermes with a penchant for philosophy. And philosophy is the series’ main hook—each episode comes off as a sort of storybook allegory focusing on a particular country. Kino serves as our surrogate, and Hermes as our guide, through the profound questions represented by each country. Would you want to read people’s minds in order to better understand your fellow man? Would you murder an animal to save the life of a human? Would you massacre one civilization to save two others from endless war? The series rarely provides a solid moral compass with which to answer its morbid questions. 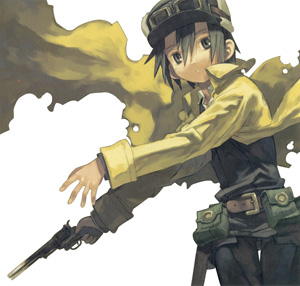 A meandering narrative chock full of philosophical dilemmas might be inexcusably dull in the hands of less competent creators, especially considering the boring result in Allison & Lillia, another anime based on a series of Sigsawa novels. However, director Ryutaro Nakamura (Serial Experiments Lain) and screenwriter Sadayuki Murai (Millennium Actress, Boogiepop Phantom) bring a unique minimalist spin to the series. Despite a drab color palette, simplistic backgrounds, and unremarkable character designs, Nakamura makes every shot spellbinding with his unnerving sense of composition and timing. For example, he often introduces the sound from a new shot before the visual appears, creating an eerie, desynchronized effect. His treatment of the rare action scenes is also excellent; I was impressed that a show so obsessed with quiet contemplation could whip out such exciting fights!

Meanwhile, Murai’s screenplay is a little terse, but when characters do talk, they provide powerful commentary on the situations unfolding around them. Many an episode ends with a brilliantly simple conversation between Kino and Hermes, capping off a 25-minute parable with the perfect concluding sentence.

Together, Nakamura and Murai create an intimate atmosphere through dialogue and close-up shots, placing Kino and Hermes at the center of the story. We watch the world revolve around the protagonists, and even with only 13 episodes, it’s hard not to get attached to these wayward wanderers. 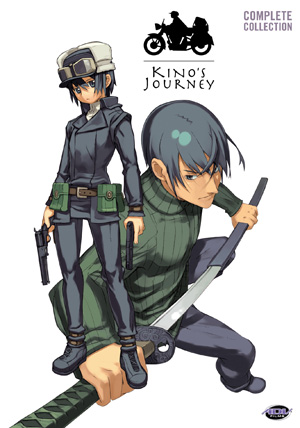 You may have noticed that thus far I have avoided referring to the title character with any gendered pronouns. That’s because Kino’s Journey actually treats Kino’s gender as an incidental detail, unrelated to the greater story. After a few episodes in which the protagonist’s sex is never explicitly stated, the show reveals the truth, but even then, it’s a sort of nonchalant reveal, and it doesn’t really affect the rest of the story. Kino never directly self-identifies as either man or woman, and seems to prefer neither male nor female pronouns. In fact, characters in one episode call Kino both “little boy” and “miss,” to which the traveler responds, “My name is Kino.” Similarly to Ed from Cowboy Bebop, Kino seems to be a deliberately non-gendered character, something I’d honestly like to see more of in general.

Kino’s Journey is an utter joy to watch. It sets up simple allegorical stories with wit and just enough social commentary to remain relevant to its real-world viewers, and presents it all through Nakamura’s unique, somewhat disorienting visual style. Most of all, however, it is a show that sticks with you after you watch it. Filled with moments of quiet, lonely rumination, Kino’s Journey really is unlike most other anime series out there. Whether you pick up the DVDs from Section23 Films or track down the out-of-print English translation of the first novel, this is one journey you won’t soon forget.

Correction: Originally this article claimed that Chiaki J. Konaka wrote the screenplay for Kino’s Journey, when in reality the series was written by Sadayuki Murai. We apologize for the mistake.

New Manga from Excel Saga Creator to Premiere Next Month
On The Shelf – May 2, 2012