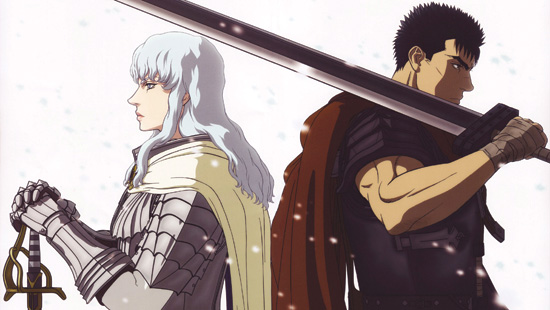 Western fantasy is one of the most predictable genres out there, whether we like it or not. There’s the stalwart swordsman protagonist whom we’re groomed to root for from the very first episode or book onward, fighting for the noblest of causes. And then there’s his rival, who would love to see the swordsman die, but only at his hand. Sprinkle in a damsel, a healthy mixture of arcane magic, prophecies, and gruesome battle sequences, and you’ve got yourself a veritable trope-tastic fantasy.

When you go into Kentaro Miura’s Berserk armed with these expectations, it’s nearly a rite of passage at this point to consider the events that will eventually transpire within the manga, anime, and films a trial by fire. This is not the “safe” Western fantasy it appears to be from a distance. It’s twisted, grim, and otherworldly. And it is, by far, one of the most engaging tales ever told about a lone wandering swordsman. If you’ve never delved into its perilous depths, consider the following a quick primer to jump start your voyage to the inner heart of the world of the Black Swordsman. Just don’t be surprised if you’re unable to find your way back to the surface. 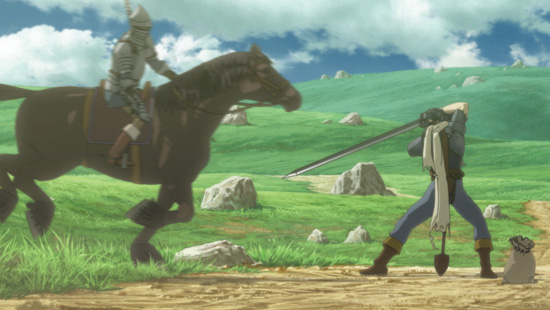 While Berserk begins just as innocently as you might expect from a fantasy series, it quickly veers off into something nearly completely unrecognizable. Follow the mysterious Guts, a wandering warrior who belongs to the Band of the Hawk. The group of mercenaries is tasked with hunting Apostles, or humans who have made binding deals with a group of demons known as God Hand. Those associated with God Hand aren’t without their own personal sacrifices, having been forced to give up something (or someone) near and dear to them in exchange for one wish to be granted.

Guts travels with the Hawks, led by the ridiculously charismatic, talented, and charming Griffith, who is looked upon and regarded by his peers as a calculating and competent leader with the drive to make all of his dreams come true, no matter the cost. It’s with Griffith and the rest of the Band of the Hawk that Guts, haunted by a harrowing past and wrestling with what makes him human, learns the true value of friendship and loyalty, until things go horribly, horribly wrong. Guts eventually becomes obsessed with becoming Griffith’s equal, and when the anime series reaches its harrowing and nightmarish climax, it becomes clear that nothing was what it seemed after all—throughout the entirety of the show. 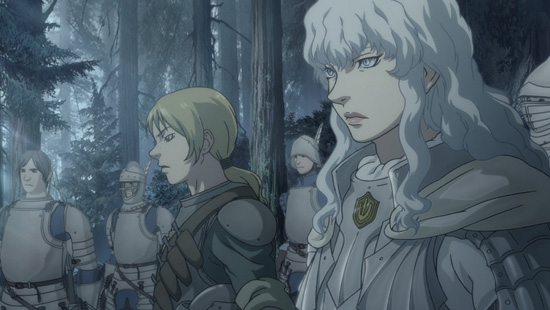 It’s easy to write Berserk off at this point as another generic fantasy during which the Evil Knight/King/Ruler will eventually and obviously be felled by the swordsman/paladin protagonist, as it certainly seems as though this is where the show is heading. However, at the conclusion of the 26-episode anime run, it quickly becomes apparent that you’re viewing something completely different.

By the end of the action-packed anime series you’ll have been forced to witness several atrocities, including sexual assault, gratuitous violence, and soul-sucking tragedies that strike when you least expect them. While the first few episodes (barring the first) seem relatively benign and hopeful, the show quickly devolves into a nightmarish onslaught of despair, copious amounts of gore, and a nigh-dreamlike haze that envelops the entire cast of characters. It’s this jarring transition that Berserk fans know all too well, and one of the greatest reasons to hop aboard this fandom train for the long haul, especially if you grow weary of sanitized fiction and other mundane instances of gritty fantasy. 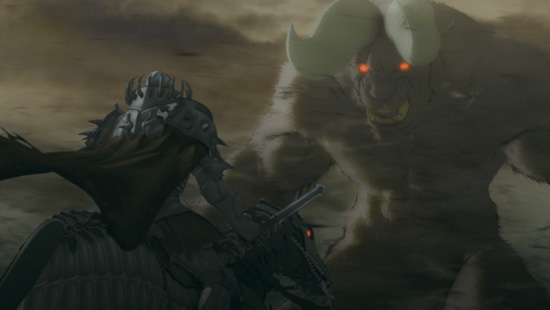 A Legacy of Darkness

Berserk is an interesting series in that the manga is still ongoing, while the anime adaptation only spanned 26 episodes, spawning three additional films released in the past couple of years. (Available from VIZ Media) There’s plenty of material to wade through if you’re ready to become completely involved with the series, though it’s best to start where everything began if you’re to get the most out of the characters and lore as possible.

Berserk began its life as a dark fantasy manga series in November 26, 1990. Its serialization kicked off in Hakusensha’s Jets Comics collection, and then after running for two years moved over to Young Animal, where it continues to this day. At 37 volumes, the story has yet to reach a conclusion, whereas the anime ended abruptly during one of the manga’s pivotal arcs, much to many a fan’s dismay. 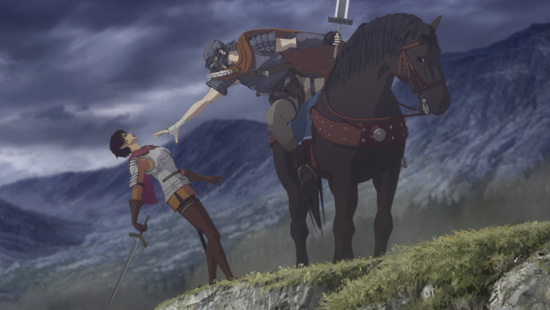 The film trilogy that released beginning in 2012 includes three entries and is known as the Golden Age Arc, acting as a lovingly animated and CG-laden retelling of the anime with a minuscule bit of additional content not seen before in the series. While the film trilogy was enough to sate viewers hungry for more, it wasn’t rich in the extra content the Berserk-hungry fanbase was clamoring for: a storyline that would draw from the still-running manga series as a full-fledged anime adaptation.

It continues to be a sore spot amongst the Berserk fan community that the anime series simply cuts off right as things spiral off into complete madness. However, with the hope that an additional film could be released to push the animated realm of Berserk beyond that of the trappings of the series, there’s a light at the end of the tunnel that pushes megafans forward. Perhaps at some point an additional set of episodes, even within the format of an OVA, can be crafted to ensure that the remainder of the manga series receives the same treatment as the first few
volumes of the manga. 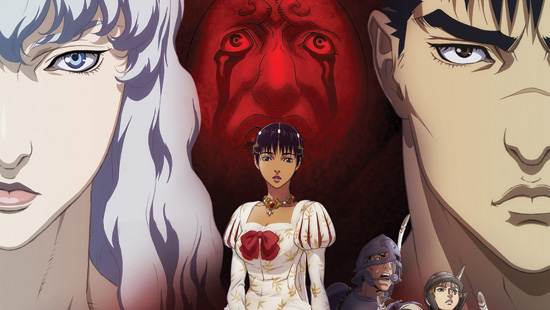 If you’re still left feeling cold after viewing
the series and films, especially since the manga series is still ongoing at this time, Berserk has expanded into several other media properties as well, including video games. Yuke’s Sword of the Berserk: Guts’ Rage released as a Dreamcast exclusive back in 1999 by ASCII Corporation, and surprisingly enough received a western localization.

Placed later on in the series’ continuity (specifically, volume 22 and 23 of the manga series) Sword of the Berserk follows Guts and companion Casca as well as Band of the Hawk member Puck as they rescue a performer named Rita from bandits. From there, things heat up as the group encounters a bizarre disease that very slowly transforms its victims into “Mandragorans,” or berserkers who kill everyone around them. The game is an interesting mixture of swordplay and brawler elements, and remains one of the most intriguing complements to the Berserk lore to date, especially given the fact that even English-language fans can enjoy it. 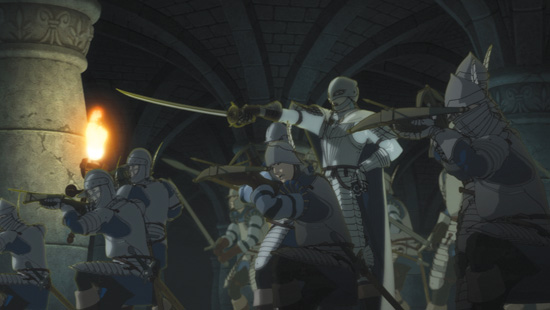 There’s also Berserk: Millennium Falcon Hen Seima Senki no Sho (Berserk: Millennium Fountain Arc: Chapter of the Record of the Holy Demon War), but it was only released for the PlayStation 2 in Japan back in 2004. It never received a localized release, though it acted as a successor to the previous Dreamcast title, using motion capture and more sophisticated technology to weave its narrative. It followed the manga series from volume 22 to 27, but unfortunately fans looking to get their hands on it outside of Japan will have to do some heavy translating work if they want to enjoy it.

Berserk is undoubtedly one of the most unique and engaging Western-style fantasies of all time, and while it does incorporate several of the most familiar tropes to be seen this side of anime, it doesn’t rely on them to tell its own story. It’s content to transcend the bonds of “classic” anime storytelling with its graphic depictions of gore, sex, violence, and the atrocities of war. And if you’ve got the stomach for it, it’ll linger with you, perhaps even as long as Griffith’s desire to ascend to greatness. If you’re looking for something decidedly different, Berserk is the series for you.