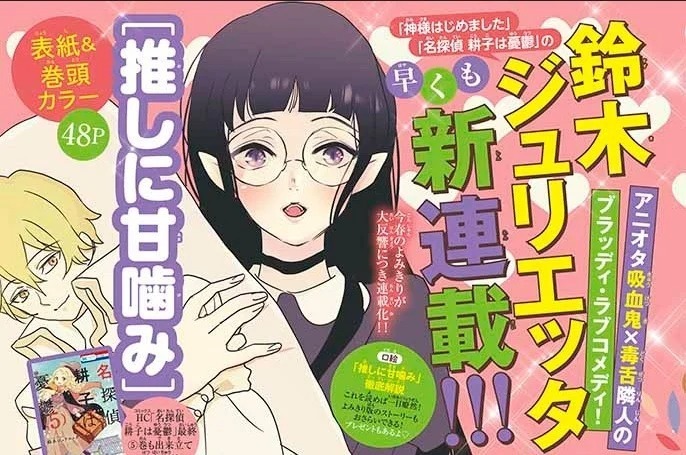 Kamisama Kiss author Julietta Suzuki has something new on the way, with a fresh manga serialization set to launch in the pages of Hakusensha’s Hana to Yume magazine. This year’s 22nd issue of the magazine announced plans to debut the new series—a vampire romantic comedy titled Oshi ni Amagami (A Nibble for My Fav)—in the next issue, which hits stands in Japan on November 5.

The issue in question will have the series on the cover and feature a color opening page for the 48-page debut chapter. The series is being billed as a “bloody romantic comedy” about a vampire who is also an anime otaku—hey, just like us for the most part!—and has a sharp-tongued neighbor.

Oshi ni Amagami first appeared as a one-shot that was published in Hana to Yume back on April 20 of this year.

Prior to this, Suzuki concluded the Meitantei Koko wa Yuutsu (Detective Koko is Melancholy) manga on June 3. Suzuki’s Kamisama Kiss manga ran in the same magazine from 2008 to 2016, ultimately collecting it all in 25 volumes that made their way over in English courtesy of VIZ Media.

Nanami Momozono is alone and homeless after her dad skips town to evade his gambling debts and the debt collectors kick her out of her apartment. So when a man she’s just saved from a dog offers her his home, she jumps at the opportunity. But it turns out that his place is a shrine, and Nanami has unwittingly taken over his job as a local deity!

Nanami has all kinds of new responsibilities she doesn’t understand, dangers she’s unaware of, and a cranky ex-familiar who’s…actually pretty hot. What’s a new-fledged godling to do?