The High-Stakes Livin’ of Kakegurui

Ante up for thirst and double down on crazy in the Kakegurui anime!

Yumeko Jabami transfers into Hyakkaou Private Academy, a school for the well-to-do and elite, where life-defining connections are made. The only measures of success here are how bad you want it and how far you’ll go to get it. In Kakegurui, students at the aforementioned academy go to classes like students at normal schools do during the day but obsess over gambling during every waking moment before, in between, and after. The stakes are huge; the players—children of leaders of industry and government—all have millions, if not billions, of yen with which to wager on their already bright futures.

Students gain notoriety and privilege by two means (neither of them grades or athleticism): donations and winning gambling matches. Win and the outcome is obvious. Lose and become a collared house pet named Fido (boys) or Mittens (girls) subject to the debasing whims and bile of those who’ve won and those who support them. There’s said to be no ladder up for those who lose gambling matches and incur debts they cannot repay, but Yumeko’s an underdog … almost literally. (Underkitten or undermittens would be more to the point.)

After coming to the school and proving an upset by taking down a number of gamblers of note, Yumeko finds herself collared. But that’s when the real fun begins. Every house pet is granted the right to redeem their status via a public match with any member of the almighty student council. But you only make it into the student council if you’re as driven as you are demented, so that makes most house pets’ efforts futile at best. Unfortunately for the student council, those are exactly the kind of odds that turn Yumeko on … literally.

Kakegurui is an insanely thirsty show, and the stunningly beautiful, hyper-stylized OP, storyboarded by none other than auteur Sayo Yamamoto, should clue you into that fact very quickly. Of equal note, the ED does a wonderful job of catering to fanservice while illustrating a sense of growing chaotic thrill. The art in the show proper, however, remains faithful to that of the illustrations by Toru Naomura in the original manga. (The very final episode of the first cour merges the manga and OP styles in one instance for great visual and metaphorical effect.) And the animation actually improves on two aspects of the manga’s trademarks (see sidebar).

Studio MAPPA, founded by Masao Maruyama (co-founder of studio Madhouse), handles animation production for Kakegurui, and there couldn’t be a more fitting match. Maruyama’s Madhouse handled production for such gripping competitive gaming anime adaptations such as Kaiji, Akagi, and Chihayafuru (see sidebar), and the experience gleaned therefrom is evident in the increased showmanship and drama behind the dealers’ actions and players’ reactions compared to those in the manga.

First, MAPPA also goes all in by amping up the crazy on characters’ faces and in their eyes; the level of detail is as phenomenal as the colors are rich. Deep shading and ludicrous lines really instill the sense of insanity derived from indulgent compulsion. Next, slight motions—tightening grips, the widening of a card shark’s grin—as well as grandiose sweeping motions and movements leading to off-camera inferences combine to build characters exploding with euphoric expression. But not everything is perfect.

Somewhat disarming is what comes off as CGI-based leggings and sets. The leggings look just different enough from the rest of the character designs to prove slightly distracting, and the sets, largely the empty main halls and classrooms of Hyakkaou Private Academy, look way too plain and clean. Granted, one would not expect a school for the elite to be a pig sty by any means, but the building doesn’t feel used in the slightest—as if it’s a backdrop without any character, and that’s indicative of another problem with this title.

Students at Hyakkaou Private Academy are expected to excel at reading people and manipulating them. This, combined with some initial shallow capitalism call-outs, offers up some great potential that ultimately and unfortunately becomes squandered in favor of character theater. Sure, these children of opulence intimidate through the power-given currency, but it’s all their parents’ money. So the massive pots of these compulsive wagers really make the show about how irresponsible the next generation is in handling their parents’ money. The mixed message doesn’t do the show any favors; if it just struck the anti-capitalism dialogue, I think the sentiment would come through given how adept the show is at conveying what monsters money makes of those with tons of it.

The monsters I mention range from the power crazy to the gambling mad—the members of the student council and the president thereof. Kakegurui falls back a little too quickly on the monster-of-the-week formula and doesn’t give most any real time to develop and thereby grow a sense of tension or danger facing the protagonist. (Midari Ikishima is an exception, and also a bit of a cheap shot due to her lethal leanings.) The Mary Sue nature of Yumeko also doesn’t help things. She has a master poker face, but the air about her is less than that; there’s a feeling that she already has enough money and enough skill to take down any of her opponents. This defeats any sort of tension so important to this type of show and relegates the joy of sinking into the series to floating on the shallow waters of how beautifully all this ugliness is portrayed.

That beautifully ugly portrayal is not visual alone; there is some stunning sound editing going on that brings out background noises and focuses viewers’ full attention on the subject front and center. (Case in point: the grinding of gritted teeth audible over narrated monologues dripping frustration.) The background music also reaps a wonderful bit of harmony with the chaos taking place on screen. And one cannot compliment the voice actors enough in truly giving their all to going over the top. Since every character has two speeds—sane and insane—both the Japanese and English VAs have the opportunity to let loose. To the credit of all involved, most of the lines never feel cartoony. I’d recommend the Japanese if you’re cool with subtitles, however, as some of the language in the localization seems a bit sharper.

A second cour of Kakegurui is coming, and that means more opportunities to bask in balls-to-the-wall crazy. Despite its pitfalls, Kakegurui is a solid investment worth your time, and I’m glad there’ll be more to watch down the road. Perhaps the second cour will lead to some more depth of character and message. If not, hey, new characters and new crazy depicted lavishly are what brought me to the table to begin with. Recommended.

Kakegurui is currently available to stream on Netflix. 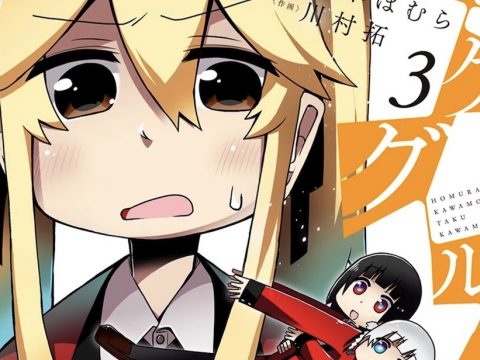