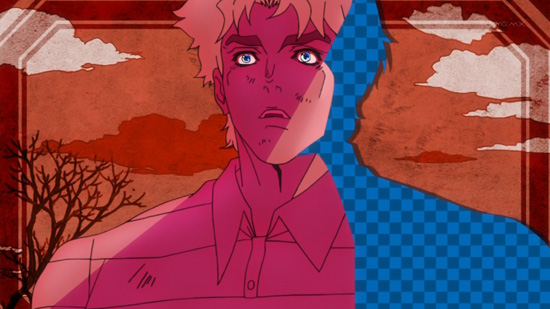 Hirohiko Araki—that magical, spritely, ageless mangaka—has been plugging away at JoJo’s Bizarre Adventure since 1987. At this point it’s one of the longest-running manga series of all time, so it’s kind of amazing that we’re just now getting a television anime based on its generations-spanning shonen action. While JoJo‘s has been treated to OVA adaptations and a feature film, the fall 2012 season was the first to be infected by Araki’s unique brand of over-the-top storytelling, and while the work of studio David Production (Inu x Boku SS, The Book of Bantorra) leaves much to be desired, it still manages to be a mercilessly radical show in dire need of licensing in North America.

Directed by Naokutsu Tsuda—who helmed Inu x Boku SS and directed episodes of Black Butler, among other series—with series direction by Kenichi Suzuki (Gundam Evolve), the TV version of JoJo’s Bizarre Adventure starts from the beginning, kicking off the first arc, Phantom Blood. The story hinges on the unique and increasingly antagonistic relationship between our hero, Jonathan Joestar, AKA JoJo, and Dio Brando, who Jonathan’s father George took in as his own to repay a debt owed to Dio’s father, Dario. Unbeknownst to JoJo and his father, that debt was born of devious pretenses, and Dio aims to become the heir to the Joestar fortune after manipulating George and driving JoJo mad.

It’s a twisted story right from the start, and it becomes even more so once Dio discovers the powers hidden in a mysterious stone mask on display in the Joestar mansion. Through all of the years-spanning conflict that bubbles, often violently, between JoJo and Dio, the mask is perched ominously, a practically chimerical Chekhov’s Gun destined to spin the story in a wild new direction. And it does just that, of course. While it’s tough to top the rough, disproportionate beauty of Araki’s early work in the manga, watching the fast-paced anime adaptation is a great way to gauge just how quickly things go from kind of weird to balls-out insane. 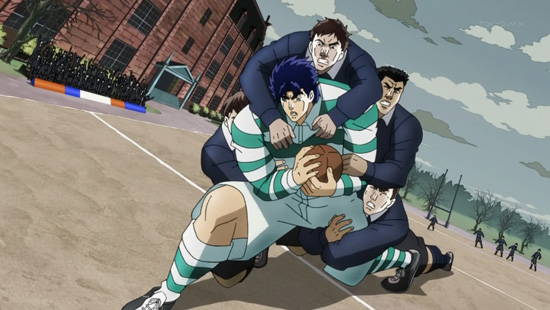 From the early moments of JoJo shrugging off half a defensive line like a slightly inconvenienced giant to the truly extraordinary climactic showdown with Dio, the first arc of JoJo’s Bizarre Adventure delivers. It’s as over the top as it should be, and every last oddity is portrayed so earnestly. Characters like the so-sincere-it-hurts Speedwagon are instant favorites, and it’s all wrapped in an impermeable charm despite high levels of brutality, most of which is obscured by dark shadows to keep things moderately television appropriate.

That’s why the show’s subterranean budget is so tremendously disappointing. 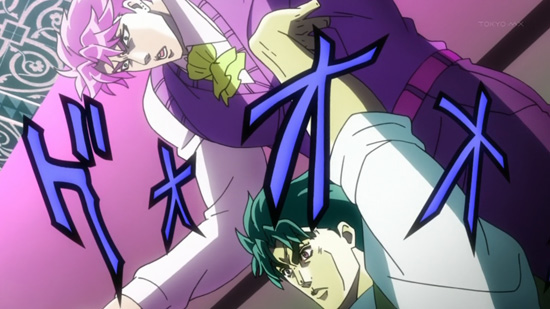 Portions of JoJo’s are about a butt hair above motion comic standards, and all the passionate special-move-announcing bellows in the world can’t disguise that. Occasionally David Production scrapes out some extra scratch for a few spectacular sequences, but otherwise this anime isn’t exactly as elegant as its dauntless dapper dandies should demand. Appropriate to its sometimes static nature, JoJo’s is full of manga sound effects that pop off the screen. It attempts to make up for its visual repose through sheer style, and often succeeds. While JoJo’s lacks impressive animation, it bleeds rainbows, imbuing frames with drama through palette alone.

The budgetary issues of JoJo’s Bizarre Adventure even extend to the intro, which isn’t to say it isn’t seriously fantastic stuff. Tommy Hiroaki Tominaga’s theme, “JoJo ~Sono Chi no Sadame~” (“JoJo ~That Blood’s Destiny~”) is the kind of blood-pumping opening every shonen series should strive for, but the CG animation looks like it would be more at home in a game by CyberConnect2, developer of Asura’s Wrath and the upcoming JoJo’s Bizarre Adventure fighter, among others. In reality, CyberConnect2’s work is probably more fluid, but whatever; “JoooooJOOOO!” The only way to avoid having that intro increase your heart rate is to skip it entirely, and that’s just ridiculous. 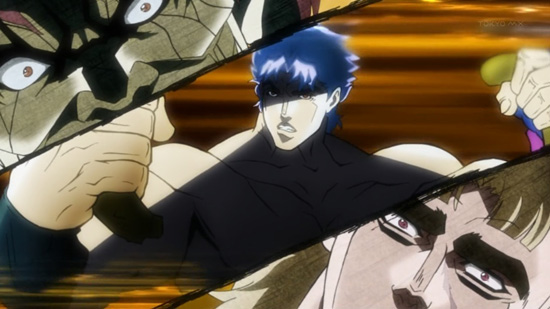 While the quality of animation remains an issue nine episodes in, the best part about JoJo’s is that it can be silly as hell and still keep a straight face. Yes, it has other issues. The pacing comes off as extremely rushed, making a lot of the situations seem even more insane than they really are. Wait, is that a bad thing? I haven’t read all of Araki’s manga, but JoJo sure seems to pick up Ripple techniques from his oddball mentor, William Antonio Zeppeli, at an alarmingly fast rate. And not that it’s exclusive to this show, but there’s a lot of unnecessary exposition throughout. Hell, the Phantom Blood arc would have ended a few episodes earlier if there wasn’t a character or two present to offer repeat reminders and descriptions of everything that happened mere seconds prior. Show, don’t tell, right? Oh fine, just tell us all about it; maybe everything happening on screen is just that incredible. 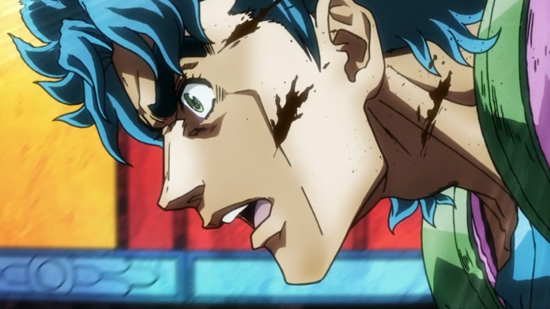 JoJo’s Bizarre Adventure has officially wrapped the Phantom Blood arc and is ready to leap into the next saga, Battle Tendency, which focuses on Jonathan’s grandson, Joseph Joestar. It’s a real shame no one has picked this up to simulcast, and it’s looking doubly doubtful at this point. If it’s the fact that each episode ends blaring “Roundabout” by Yes, then just nix the song; who cares? Actually, that’s a good question… and maybe it’s one I don’t want answered. I’d rather believe I live in a world where everyone wants to enjoy something like JoJo’s Bizarre Adventure than face a harsher reality. Besides, that “Roundabout” ending is pretty damn awesome.

A Special Message from Risa Yoshiki!
Feast Your Eyes on the Attack on Titan Anime Preview