Johansson, Kitano Appear at Tokyo Ghost in the Shell Event 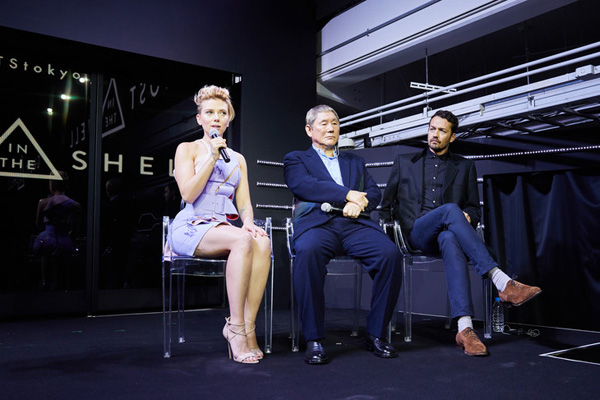 At the event in Tokyo November 13 that saw the release of the first trailer for the live-action Ghost in the Shell, stars Scarlett Johansson and Takeshi Kitano appeared alongside director Rupert Sanders for a chat about the making of the movie.

That was in addition to a screening of the new version of the iconic “shelling” sequence, which is now viewable on YouTube.

Some choice tidbits from the talk:

Sanders, on the original Ghost in the Shell film: “when I saw the original Mamoru Oshii film, I thought it was really ahead of its time. The theme was about how we face a future in which technology has permeated our culture. I’m a fan of Ghost in the Shell, and I wanted to preserve its cyberpunk style in live-action form.”

Kitano on why he accepted the role: “it’s a Hollywood movie, so it’s in English. I told them I didn’t want to do it and they said, ‘Japanese is okay.’ Then I told them I couldn’t remember my lines and they said, ‘you can use a teleprompter.’ When I got on set, Scarlett Johansson was there holding my cue cards. I was so moved I wanted to take a commemorative photo. After that, I tried hard to properly memorize the script.”

Johansson, on being cast: “I hadn’t heard of Ghost in the Shell until I got the offer. Watching the anime, I felt quite scared. It’s a very philosophical work, and I wasn’t sure what contribution I could make to the live-action version. At the same time, it was very attractive.”

In addition to the talk, the event also revealed a clip from the film, a remake of the iconic “shelling sequence” from the original film. While the sequence was shown at the event, original composer Kenji Kawai performed live, though it is unclear whether his music will appear in the actual film.

Note: Sanders and Johansson’s remarks were translated from the Japanese source.