How in the world did we miss this? Our very own Jason Thompson—Eisner-nominated author of Manga: The Complete Guide, reader of a million comics, and the first ever TASTER of manga—was recently drawn into a guest appearance in Hiro Mashima’s Fairy Tail.

After being interviewed by Thompson at the 2008 San Diego Comic-Con, Mashima requested photographs of Jason so he could draw him into his manga in a future installment. Sure enough, this mighty task has come to fruition, and Jason can be spotted in chapter 104 as “Weekly Sorcerer reporter Jason.” Just look at the excitement on his face as he springs forth to interview members of the titular guild! 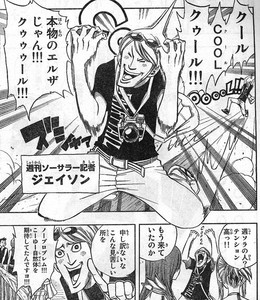