Iron Blooded Orphans is One of the Best-Ever Gundam Series 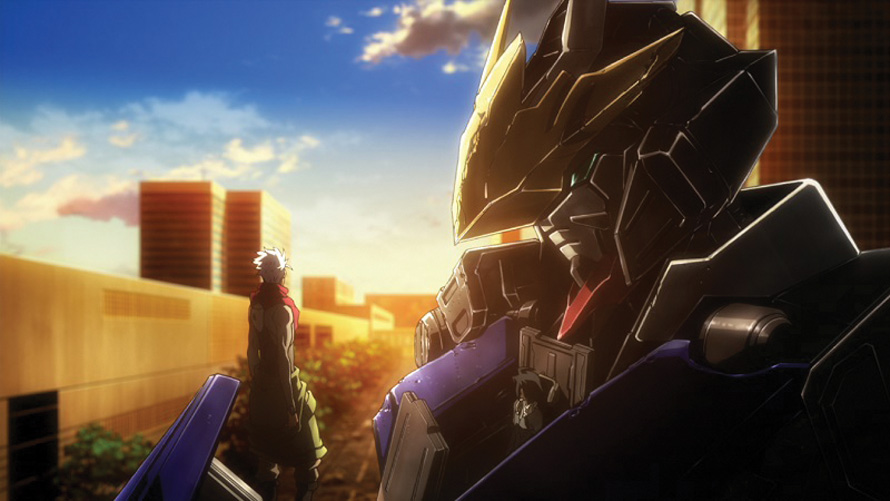 Iron Blooded Orphans is the most dramatically effective entry in the Gundam series since 0080: War in the Pocket, a suspicion I’d felt while watching the series as it aired and one affirmed totally after watching Bang Zoom!’s dub of the first season over the last few weeks. Unlike many commentators have suggested, though, the series’ strengths are not attributable to its dark atmosphere or any decision to tackle heady and topical subjects. Other Gundam shows have done as much before, after all: despite tonal failings and late-season derailing, 00 Gundam was every bit as political as its successor, with sights trained on the dangerous ramifications of proxy wars fought by private military companies, religious fanaticism’s ability to spur conflict, and the consequences of neocolonialism in the Middle East; Gundam Wing was uncannily prescient in predicting the rise of drone warfare and its disastrous impact on how humans interpret warfare.

No, what lends Iron Blooded Orphans its particular power is not its frank depiction of the atrocities endured by child soldiers so much as director Tatsuyuki Nagi and screenwriter Mari Okada’s decision to structure their story as, primarily, a tragedy in the classical sense. While this, again, might sound like nothing new for the franchise created and often helmed by the infamous Yoshiyuki “Kill ‘Em all” Tomino, the truth is in all but 0080: War in the Pocket, even the bleakest of Gundam stories feels not so much tragic as juvenile, their mountain-high body counts attributable less to the author’s moral calculations than to a malicious streak indulged or a desire to disturb a bored audience.

The real measure of a tragedy’s worth stems not from its brutality but from how inevitable its ending plays upon a second or a third experience, how dreadful and unwelcome the build to the finale’s carnage is and yet how utterly right the feeling that descends on the audience when the curtains close once again on those ruined dreams and undone heroes. Any creator with a sadistic temperament and hateful imagination can churn the stomachs and shock the sensibilities of even the most jaded through violent spectacle. It takes a hand more deft to write characters and situations that feel doomed not by authorial spite so much as by fatal flaws easily mistaken at first glance for the kind of grand and exciting attributes we associate with the greatest heroes, to turn what seemed cause for celebration into an occasion for cathartic tears.

Okada and Nagi do know this, a fact that reveals itself almost instantly upon rewatching Iron Blooded Orphans. All those traits that first attract us to the series’ heroes, that make it so easy to root for the soldiers of Tekkadan and their associates in Teiwza, suddenly, immediately appear on second watch to be as fatal to the informed viewer as they ultimately prove. Every line seems weighed carefully, every character meticulously designed to ring the ultimate amount of pathos out of their arcs through an appeal to a dramatic irony that sours even the grandest triumph.

It’s hard to see Orga’s endless bravado and indomitable spirit as aspirational attributes when one knows the same traits that allow him to ascend from orphan to an international power and to attract so much loyalty are born of a desperate need to impress Mikazuki that will also ultimately doom his every enterprise and his closest friends. Conversely, Mikazuki, whose cold and pragmatic approach to all things at first makes him seem so invincible, looks after an informed glance like the deeply damaged creature he is, a man condemned to realize only too late that there was more to life than chasing the endless high Orga provided (and then only because Mikazuki demanded it). Even the constant waxing about power and corruption courtesy of McGillis, the latest Char in the Gundam canon, which seems at first like nothing but exposition, takes on ugly significance in light of his horrific past, his warped philosophy, and his admiration of the monstrously powerful Mikazuki.

And yet even as skilled as they are at setting up larger thematic threads, Iron Blooded Orphan’s creators would have little to offer if they didn’t also know how to write people whose personalities evoke not just our sympathy but our support. And so the cast of Iron Blooded Orphans—all large personalities in their own right—stands out as one of the warmest casts in recent memory. There’s an ease and a naturalness to their interactions—the way Biscuits can shrug off his comrades’ jibes about his girth because he knows it’s all a piece with the immense respect they afford, the way Shino’s endless shouting about his love of women seems somewhere between an earnest joy and a flailing attempt to hide a budding homosexuality—that invests every element of their struggles with earnest humanity.

It’s a shame, then, that same willingness to write large, expansive characters so easy to connect with is, in its own strange way, one of Iron Blooded Orphans’ greatest failures. For as much as is made of the story’s hard-bitten approach to reality, one wishes it might be harder bitten still. The members of Tekkadan are perhaps too well adjusted for child soldiers: aside from Mikazuki, they laugh too easily, bond too easily, learn too easily to trust and love, a fact that becomes even harder to accept when one witnesses the ugly life suffered by other child soldiers they encounter throughout the series. Though the contrast is not accidental—it is almost always intended to emphasize that the warmth experienced by those in Tekkadan is the exception—it cannot help but make this joy seem false.

Even the darkest moments seem somehow muted in effect because of this. If Orga and Akihiro and their friends grew up in similarly heinous conditions, what but the author’s pen spared them from ending up like the “human debris” employed by the Brewers? Meanwhile, the gritty mech battles might be more grounded than the transcendental antics of the New-type infested Universal Century series and the carnival of colony-erasing lasers prominent in the spectacle-obsessed Wing, but even in the early stages they still shade too easily into the outlandish. The brutality of these skirmishes is beautifully accentuated by the art, the direction, and the mech designs, all of which lend combat real body and weight, but the endless glorifying of every impressive martial feat oddly renders weightless the series’ ferociously antiwar thrust (a flaw common to almost every Gundam title). The result is a series that can register as oddly toneless and flat of affect at those moments it should be angriest and ugliest; the result is a series that often seems hollow.

That is not to suggest that these flaws are so fundamental they sabotage Iron Blooded Orphans completely. Far from it. There are scenes of real and shocking power here and an oppressive air of fatalism that lends Iron Blooded Orphans a force absent from most other Gundam series entries; its status as one of the finest titles in the franchise’s long history seems secure. One only wishes the creators had been braver than they were, had gone for something even more unsparing: it’s a tragedy that it couldn’t stand stronger as one of the best anime in the larger mecha genre—or simply one of the best anime—when there was the potential for so much more.