BLITZ, which has been published by Shonen Jump, becomes available in America this month through ABLAZE Comics. The chess-themed series is written by Cédric Biscay and Harumo Sanazaki and illustrated by Daitaro Nishihara, with chess grandmaster and World Chess Champion Garry Kasparov also involved. Biscay and Nishihara both spoke to Otaku USA about working on BLITZ, how they got into manga, and what their creative process is like.

How did you get into manga? What drew you to the genre?

First of all, I am a manga and anime fan since my childhood, I grew up with Dragon Ball, City Hunter, Captain Tsubasa and so on. At the beginning, I was absolutely not confident to start any manga because I am not Japanese, and I cannot draw, and I have absolutely no background as a storyteller.

Finally, after 20 years of experience working with Japan, I decided to move on and use my reader experience to launch my own manga. I like sports manga a lot—such as Eyeshield 21, Slam Dunk, Hajime no Ippo—so naturally I created a sports-oriented shonen manga.

Please tell us about your company Shibuya Productions and what it does.

Shibuya Productions is an entertainment company dedicated to the creation/production of video games, animation, manga, and documentaries. It was established in 2014 and we have already produced some strong titles in the game industry such as Shenmue 3 and Twin Mirror.

We are also working on a new animation project, Astroboy Reboot and many other projects.

The company also organizes every year (when COVID-19 allows it…) the MAGIC events in Monaco and in Kyoto.

It is a limited-entry event dedicated to pop culture and every year we invite superstars of manga, comics, and video games such as Tetsuya Nomura, Frank Miller, Yoichi Takahashi, John Romita JR etc. for conferences, meet and greets, etc.

Where did the idea for BLITZ come from? Were you already a chess player?

When I was in elementary school, we only had two options when the rainy days come. Chess or table tennis.

I am not a strong player, but I am happy to know about the rules and basic moves. When I decided to create a sports manga several years ago, I thought chess would be a very interesting topic because there aren’t so many chess manga or chess comic books, and the chess audience is international.

What was your creative process for writing BLITZ?

First, I started with a global storyline, and I worked a lot on the character settings. Of course, I also exchanged a lot with the Japanese team in order to make [certain] that those ideas could fit with the manga style.

How did Chess Grand Master Gary Kasparov get involved?

When I decided to create a chess manga, I immediately thought about him. For me, he is like a superhero of my childhood. The man vs the machine, a kind of Terminator!!

I did not have any connection with him, so I simply sent an email to the general box of his company with my request and basic info, then I received a reply asking me if we can meet in Paris. Of course, I said yes, then I could pitch him everything and he said yes!

Is there anything you’d like American fans to know about you?

You know, I work in a country where I am the only manga writer, I would love that Monaco be recognized in US among the pop culture world thanks to BLITZ. 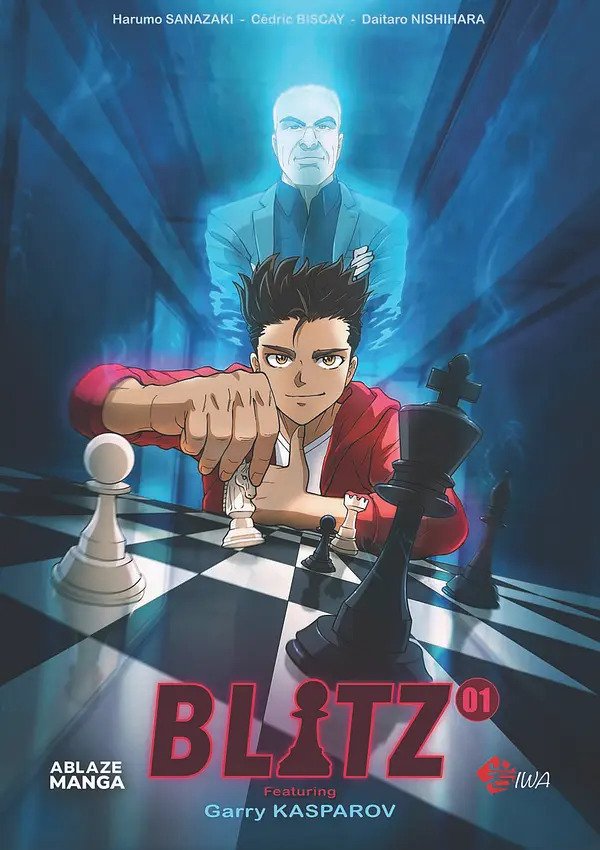 How did you get into manga?

When I was in high school (17-18years old), I submitted a manga to Weekly Shonen Jump twice, but I couldn’t reach any of the awards. After graduating from high school, I got a job. That year I was selected for the Incentive award twice. The following year (20 years old), I received an Honorable Mention, and my award-winning work was published in an additional issue of Monthly Shonen Jump, making my debut. That was the beginning of my manga career.

When did you start drawing? How would you describe your style and what inspires you?

Since elementary school, I have loved drawing manga as much as reading manga, and I was always drawing manga on the backs of advertisements and in notebooks. The walls of my apartment were also covered with my drawings. My style ranges widely from children’s comics to boys and youth comics. It is not fixed in particular.

I am inspired by movies, TV dramas, anime, manga, and many other things that awaken and move people. Someday, I would like to draw an original work that can inspire people in this way.

You’ve previously created manga all by yourself. What is it like working with authors and concentrating just on the art?

How did you get involved with BLITZ?

I got involved with BLITZ through a good working relationship. I didn’t know much about chess and it was unknown world, but with a positive attitude that it was important to take on challenges, I was able to take advantage of the great opportunity, BLITZ.

What was your creative process for drawing BLITZ?

Chess is a very hard brain sport, but the movements are very simple and not flashy. The major challenge was to be more creative based on these factors and make the scene attractive enough to keep readers interested. In particular, in the chess scenes, I paid attention to the angles and speed to accurately express the psychology of the intersecting professionals. Furthermore, in the image battle scenes, I devised ways to depict each scene by changing the content and angles of the battle.

Is there anything you’d like Western fans to know about you?

I would be grateful if they could get to know my name through BLITZ. I am filled with gratitude.

What are some of your favorite manga series?

I like manga that are first-class entertainment but also are passionate about the main character’s life and deep enough to tug at my heartstrings. I have many favorite manga, but I especially have always loved Ushio and Tora, Berserk, and Parasyte. More recently,
Jigoku Hen. Jigoku Gokuraku is a particular favorite.

Bleach: Thousand-Year Blood War Gets U.S. Premiere at NYCC in October
Final BEASTARS Season to Premiere on Netflix in 2024