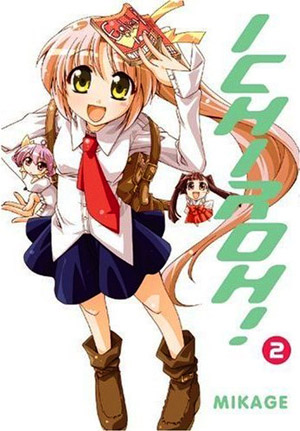 Poor Nanako. She failed her college entrance exam, and now she’s a prep school student trying to get her life on the right track. And she dresses up as a fake maid for a maid café to pay for her school expenses. The usual stuff.

I’ll tell you this right up front: this manga is bursting with moe. Moe, moe, moe. If you like moe, you will probably like Ichiroh! If you do not like moe, well…

I’m personally not so interested in moe. I can enjoy stuff spoofing moe, like My Girlfriend’s a Geek, but it in itself is hard for me to take seriously. Because of that, this is a little difficult for me to review. I’m not saying it’s bad, I’m just saying it’s really not my typical read.

Nanako and her scatterbrained friends are trying to get their lives together, but darn things like video games and manga keep distracting them. The characters really look like stereotypical manga characters and not original creations. Even people who don’t know much about manga and anime can look straight at this and know it’s Japanese. We’ve got those huge, huge eyes, expressive mouths and funny hairdos.

And then there’s the maid café, which more than one girl gets involved in. It may not be their idea of a good job, but the pay is acceptable, and money is needed to pay for school (or more video games). I guess anyone into maid cafés would probably enjoy the characters’ foray into the world of frilly dresses and saying “Master.” But I certainly understand the characters’ desire to not work there.

There’s not so much in the plot department. There’s stuff about girls going to school, getting distracted, being at a shrine, buying glasses, etc. It’s mainly written in 4-Koma style (think gag/comic strips), and while it’s barely over one hundred pages, I found it taking longer for me to read than I expected. I’m a fast reader, so I thought I’d zip right through this. Instead, something about the style and storytelling slowed me down.

So there you have it. Ichiroh! is definitely a niche read and not one I’d recommend to every manga fan. However, it has its humorous moments, and it’s full of moe for those that enjoy it. And maid cafés. Did I mention the maid cafés?