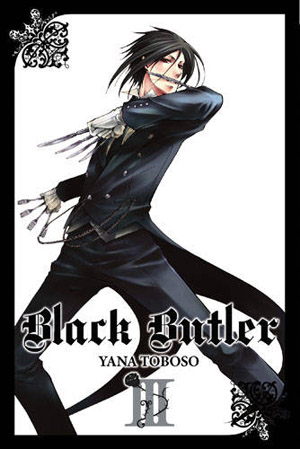 No wonder Scotland Yard never caught Jack the Ripper. They were searching for a single male individual who was also, you know, human. Black Butler sets the record straight: The Jack the Ripper murders were actually the work of two individuals. One was a woman (ruining the whole male theory) and one was a Grim Reaper (ruining that whole human theory).

Okay, so maybe that’s just a tad bit unrealistic, but this is Black Butler, which plays on Gothic fantasy and takes place in an anachronistic Victorian England. If you’re going to get caught up in all the “Oh, that can’t happen” stuff, you’re going to miss out on the fun.

Most of this story revolves around solving the Jack the Ripper case. I have heard the theory that Jack the Ripper was a woman, but the Grim Reaper is something altogether new to me. Devilish butler Sebastian and his master, Ciel, confront the culprits. The woman is someone Ciel knows personally! The Grim Reaper goes a little crazy with his fancy shmancy chainsaw, and he and Sebastian duke it out for a while.

I’m not so into fight scenes, so I more enjoyed the little background information on the woman who did the murders. We have her reminiscing on a childhood where she felt like an outsider. She bemoans the fact that the man she loved—whose name she will never tell—married her sister instead of her. The murderer (Jill the Ripper, perhaps?) recalls how she got married and pregnant, but there was an awful carriage accident that killed her husband. In order to save her life, her uterus had to be taken out. She’s desperate for a child, and her need for one transforms itself into her twisted murders of prostitutes.

After the whole Jack the Ripper mess gets cleared up, we move on to a shorter, more humorous story, where Ciel’s fiancée’s mother comes to visit and raises hell. She keeps accusing Sebastian of looking lecherous, but he just can’t help it. She seems to think just the normal way he looks is somehow lecherous. Imagine that.

The third volume definitely does a good job at switching back and forth between horror and humor, and sometimes mixing them both together. While there are aspects of Black Butler that remind me of other works, like Kaori Yuki’s manga, it also has a very unique feel to it.