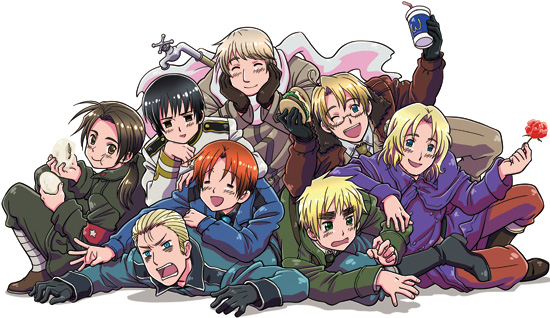 Propaganda is a powerful and dangerous tool. This is an argument that few would disagree with, and it’s this concern over the potential impact of Hetalia that Daryl Surat raises in his feature coverage of the theatrical film Paint It, White! in the February 2012 issue of Otaku USA. Now, in this second look, let us examine if Hetalia is truly deserving of a suspicious eye or if one can carelessly enjoy it as innocent, albeit unashamedly taboo, satire.

For the uninitiated, the central concept of this no-holds-barred comedy is that of World War II era nations personified as attractive young men (and a few gals), complete with ethnic stereotypes defining their traits. While the assortment of characters within the Hetalia universe is immense, given the ease of throwing another country into the mix whenever warranted, the main cast is comprised of the major Axis and Allied players of WWII, and the wacky personalities of this bunch come off like a politically incorrect rendition of the seven dwarves: ditzy (Italy), flinty (Germany), stilly (Japan), cocky (America), dopey (Russia), stately (China), prissy (England), and vain (France). Okay, technically that’s eight, but I suppose titular character Italy (“Hetalia” is a portmanteau of “Italia” and the Japanese word for “good-for-nothing”) can be our demented Snow White. 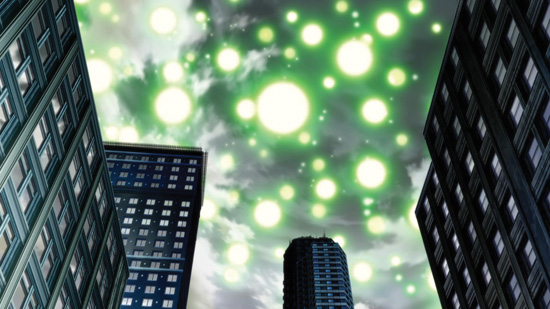 The brilliance of Hetalia is in the way it lampoons international relations. Real-world history provides an endless source of material, as conflicts and alliances of both the past and present are cleverly metaphorized as slapstick bickering and innuendo-laced relationships. And given its webcomic background, Paint It, White! largely avoids the pitfalls of TV-to-movie anime adaptations. Too often this transition is only to the detriment of both the televised and theatrical versions, highlighting and contrasting the weak spots of each. A movie, with its bigger budget, only causes a viewer to wish that the show it was based upon had the same level of animation quality, while a theatrical film fumbles to capture a story that was previously developed over dozens of episodes. With Hetalia, no worries; it never had a distinct storyline in the first place.

So as thin and short as Paint It, White! may be, it still possesses the most in-depth plot the franchise has ever followed, as the boys unite against a mutual, alien foe that threatens to fashion the entire Earth in its own bland, faceless image. Even this appears to be a stretch for the creators, as the movie is peppered with random “flashbacks” that interrupt the battle against the invading Pictonians. Established Hetalia fans may find this a tad disappointing, as these scenes are pulled straight from the show, although marginally remade. Hetalia newbies, on the other hand, need not fret since, outside of the chaotic opening scene, it’s a breeze to nail down the characters and comprehend the humor. 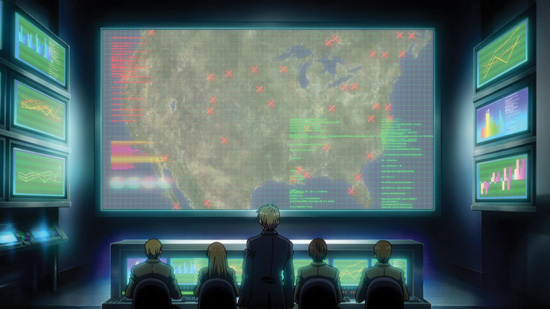 Comedy certainly isn’t the most demanding genre when it comes to animation quality, but between the adorable, chubby faces and the presence of every boy’s love archetype under the sun—pretty boys, rugged sorts, cutie-pies, you name it—there’s plenty to keep ravenous fangirls happy. But even if you couldn’t care less about that angle of Hetalia, there is plenty to enjoy on all counts. Animation is satisfyingly fluid when called for, especially in the subdued CG used to good effect, but it knows precisely when to get herky-jerky to bolster the silly high jinks. The detail work on architecture and flora is worth taking note of, but for a great deal of the film, the backgrounds will look like soggy paper cutouts, as the Pictonians use their Lisa Frank rainbow beam to, well, paint everything white. A unique concept, no doubt, but one has to question if the animators were hunting for shortcuts.

The music of Paint It, White! is appropriately quirky, but the voice work steals the spotlight in the audio department. While I hesitate to use the word “subtle” to describe anything in the wild world of Hetalia, the Japanese performance is indeed just that in comparison to the dub. The Japanese actors do an excellent job capturing the varied personalities and leave it at that, but the English cast fully embraced the controversy, opting for ridiculously over-the top fake accents. Unfortunately, this diminishes the clarity to a degree. The dubbed script also features some alterations—dumbing down some jokes, pumping up the yaoi factor, and overall making characters a touch more spiteful and antagonistic. 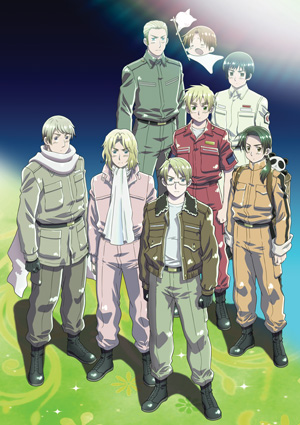 When all is said and done, I would conclude that Hetalia is harmless good fun, but it definitely has the potential to offend those who find ethnic stereotypes abhorrent under any circumstance. The key factor here is that every single character-nation, despite his or her flaws, is portrayed in a positive light, even the Axis countries. It’s true that Hetalia doesn’t acknowledge the atrocities of the past, but it doesn’t need to either. Rather than representing specific leaders or actions taken by a nation, each character aims to encapsulate the “spirit” of a country, and no country, as a people, deserves to be villainized. No matter where your ancestors hail from, every nationality is worthy of pride. Of course, it’s wonderful to be able to laugh at oneself too, and much could be said about how hilariously self-deprecating the character Japan is. The overarching message of Paint It, White! is also commendable with its stance against hegemony, emphasizing the need to preserve and value our cultural differences. For all of its crassness, Hetalia has amazingly inspired a lot of good. You can find nary a Hetalia fan that hasn’t been inspired to learn more about the historical references behind the gags or take greater pride in their ancestry, and, for that, Paint It, White! shan’t receive my ire.