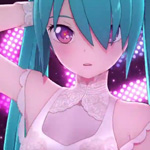 Pharrell Williams has been all over the place lately, so it’s not too surprising to see him getting together to work with Japan’s Vocaloid superstar Hatsune Miku. Pharrell took livetune’s 2013 Miku hit “Last Night, Good Night (Re:Dialed)”—included on its first best album Re:Dial and used in artist Takashi Murakami’s feature film Jellyfish Eyes—and remixed it.

Completing the package is a music video by Murakami, which features Miku, livetune, Murakami, and Pharrell as anime-style characters. Watch them jam along to the song below.

The song is available on iTunes, Spotify, and Amazon MP3. Here’s the original: