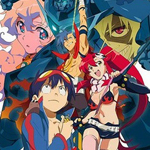 It may not be the addition of Kill la Kill that some were hoping for, but Adult Swim’s Toonami block is still adding some more action from the director/writer duo of Hiroyuki Imaishi and Kazuki Nakashima. Tengen Toppa Gurren Lagann is the next anime to join the block’s lineup, with the first episode to premiere on August 16 at 2:00am.

The announcement came on Sunday via the official Toonami Tumblr page. The latest Q&A video was posted, featuring a question from a fan regarding the possibility of the block airing Gainax’s 2007 Gurren Lagann series. What better way to respond than with an immediate confirmation?