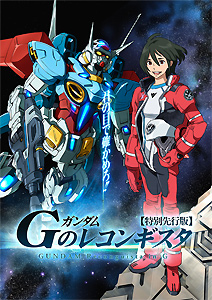 For Gundam fans, this October will mark an historic occasion: the return of series creator Yoshiyuki Tomino, who has been absent from the Gundam director’s chair since 1999’s Turn A Gundam.

This time around, he’s the writer and director of Gundam Reconguista in G, a 25-episode series celebrating the Gundam franchise’s 35th anniversary. Fitting, then, that Tomino is back at the helm.

Gundam Reconguista in G is set to premiere in October, but this week the first three episodes were released in Japanese theaters as a preview for the series.

Reconguista in G takes place long after the events of the original Universal Century Gundam in an era called Regild Century, in which a giant elevator called the Capital Tower extends into space, harnessing energy for the earth.

Reconguista’s main character is Beruri, a cadet in the Capital Guard, a team of mobile suit-piloting soldiers created in order to protect the Capital Tower. On his first sortee, Beruri defeats and captures a space pirate named Aiida. Aiida’s powerful mobile suit, the G-Self, can only be piloted by her – or so she claims, but when Beruri steps into the cockpit, the G-Self responds to his commands.

Thus begins a series of events that forces Beruri to question his allegiances and and figure out the truth behind the Capital Tower. 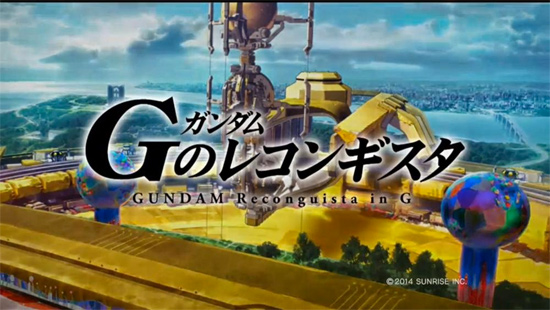 And an interesting one it is: though some might be upset Tomino’s not tackling a U.C. story, the new Regild Century gives him room to do some interesting world building. One of the first shots in episode one takes place in a church, establishing the importance of religion: the energy source taken from space by the Capital Tower is worshipped as a sacred object.

We’re also shown elaborate dinner parties and ceremonies attended by well-dressed delegates and government higher-ups, thanks to the fact Beruri is the son of one of these higher-ups. This is a society used to peace, which is threatened as the series opens by the space pirates.

There are clues, though, that the elites behind this peaceful society might not be the good guys. For one, the G-Self is the only mobile suit in the series (so far) that resembles the hero RX-78-2 of the original series, and it’s used by the pirates, not Beruri’s Capital Guard. Not to mention the space pirates don’t seem to be out for treasure.

Designs for the series are by Kenichi Yoshida, best known for his unique designs on Eureka Seven. The designs here definitely recall Eureka Seven, and whether that’s a good thing or bad thing is up to taste: for me, they feel a little childish.

The animation quality of Reconguista varies – there are some impressive shots, especially in the first episode (the first 10 minutes are available online). On the whole though, things feel a bit flat. Showing television anime in theaters runs the risk of emphasizing flaws, though, and Reconguista may look better on the small screen.

After three episodes, it’s also not yet clear what tone Tomino is aiming for. The aforementioned designs, plus some visual gags early on, key the viewer in that this is going to be a lighthearted ride, but it switches to a very serious death scene soon thereafter – and then right back to gags (there are also a couple odd scenes of violence against women – disturbing not because they’re there, but because they’re brushed off immediately).

I’m not enough of a Tomino expert to know whether these abrupt tonal changes are par for the course, but here’s hoping Reconguista finds its voice, because the world Tomino’s created has some real potential.