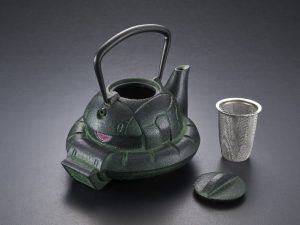 There’s a Gundam café in Akihabara, and it’s joined forces with Bandai and traditional craftsmen from Oshu City for some new merchandise. Taking a cue from MS-06 Zaku II, they’ve made a Zaku head cast iron kettle.

These are not factory made items being pumped out. They’re created with Nanbu ironware, which is a traditional craftsmanship well-known in the Iwate prefecture and allegedly going back almost a thousand years.

They’ve gone on sale in Japan, but so far there’s no word if they’ll be released outside of their home country. If it were available, would you use this to make tea?

Girl from the Other Side: Siúil, a Rún Kickstarter Brings in About $208,960.49
Vote for Your Favorite Iyashikei Anime!