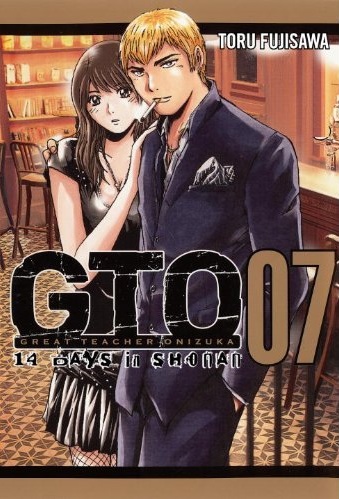 Eikichi Onizuka’s return to his old stomping grounds of Shonan has been a long and hard road thus far, but he’s met every obstacle with his typically boisterous and reckless manner of response. Volume 7 of GTO: 14 Days in Shonan sees Onizuka exacting revenge on an unruly young girl the only way he knows how: Through methods that both go too far and manage to reveal more of his character and show how much he truly cares.

Miko has taken things to an extreme against Onizuka, and the plan he puts together in this volume turns the tables on her to such a degree that she ends up on the run from the hot pursuit of police. Without spoiling how it all turns out, Onizuka’s scheme centers on burning down the White Swan group home and pinning the act of arson, along with multiple counts of murder, on the unsuspecting Miko. That’ll show her!

Her side of the story mostly comes to a close in this volume, and the rest is dedicated to a more lighthearted scenario, in which the military plane-obsessed headmaster teams up with Ryoichi to take on the “Parent and Child Be a Bird” flight competition. Naturally, things go horribly awry with their man-powered replica Type Zero Model 21 Carrier Fighter—basically a giant, meticulously crafted plane frame set atop a bicycle—and Onizuka volunteers to step in and help Ryoichi beat a bully at the game of aviation.

This is a really fun volume of 14 Days in Shonan that manages to hold a few surprises here and there. Toru Fujisawa’s art is solid as always, and despite the fact that we more or less have an inkling of how things are going to turn out in the Miko story, it’s the way it’s executed that’s pure GTO. It was also refreshing to see the situation with the headmaster go down a bit differently than one might expect. Whenever he makes an appearance he tends to be the Mr. Wilson to Onizuka’s Dennis the Menace—a position typically held by the bald, pathetic, and hilarious vice principal Uchiyamada—but, amazingly, that’s not the case here.

Sadly, 14 Days in Shonan is coming close to the end of its run. It kicked off in Kodansha’s Weekly Shonen Magazine back in 2009, and ultimately closed its curtain at 9 volumes. Hopefully that serves as even more incentive to check the series out. As stated in previous reviews, though it does help, there’s no need to read all of the original GTO manga before jumping into 14 Days. It remains one of the most consistently enjoyable series currently being published.

Carry Your Baby in a One Piece Style Sling
On The Shelf – February 20th, 2013