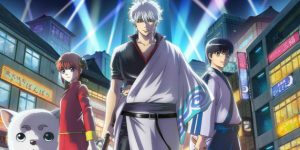 If you’ve been following Hideaki Sorachi’s Gintama manga for a while—or just watching the anime—its lengthy run is finally about to come to an end. According to the latest issue of Weekly Shonen Jump magazine, there are just five chapters left, which schedules the ending for September 24 if there aren’t any delays in publication.

Gintama first kicked off its run in the pages of Jump back in 2004 and entered its final arc in 2016. At the time of this writing the series has been collected in 74 volumes.