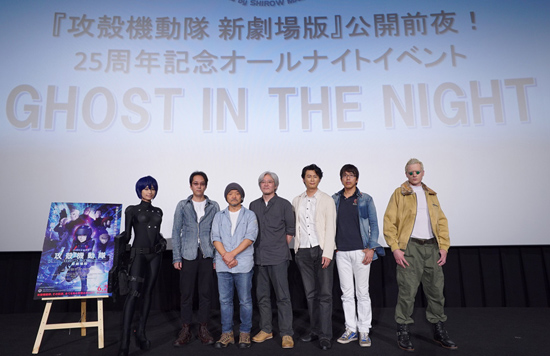 June 20 saw the Japanese premiere of the new Ghost in the Shell film (Kokaku Kidotai: Shin Gekijou-ban), but an all-night event in Shinjuku on June 19 hosted a (slightly) early look at the film, a Ghost in the Shell marathon, and reflections by several directors and creatives involved in the franchise’s 25-year history.

Ishikawa explained that when producing Arise, his first priority was to convince Ubukata (Mardock Scramble) to join the project, only after which Kise was decided on as director. He explained it was important for Kise to “break” Ghost in the Shell to turn it into something new.

Kise and Ubukata spoke of their nervousness showing their new film in front of Ghost in the Shell veteran directors, though, Ubukata said, “it’s not as bad as when we premiered Arise episode 1. I was really tense and ended up drinking until 4am.”

Ishikawa explained one of the goals of the Arise project was to appeal to younger fans who might not have seen Ghost in the Shell before but still retain the series trademark deep philosophical elements.

Stand Alone Complex director Kamiyama said of the new film, “Kise and Ubukata have made a very easy to understand version of Ghost in the Shell.”

Original Ghost in the Shell director Oshii and Kamiyama both commented favorably on main character Kusanagi’s new bang-less haircut, which apparently has been a big topic of discussion on the internet.

“Kise has made a Motoko Kusanagi that is truly his,” said Oshii.

Regarding Stand Alone Complex, Kamiyama admitted that even before he was asked to direct the series, he already had some ideas about how he would direct a Ghost in the Shell project if given the chance. “So the fact I actually got to become the director was some kind of miracle,” he said.

Speaking about his original Ghost in the Shell film, Oshii remarked on how technology has in many ways caught up to his vision.

“I had no idea smart phones would be as prevalent as they are now,” he said. “When we made the film, the internet wasn’t even widely used, so I just used my imagination. Back then I couldn’t have imagined it would be so widely used now.”

Oshii also mentioned a possibility of returning to the franchise in some way, stating “if I were asked, I wouldn’t be able to say no.”

Following the talk show came screenings of the new film, several episodes of Arise, Stand Alone Complex and the original film, leading to an evening that could only be described as vast and infinite. 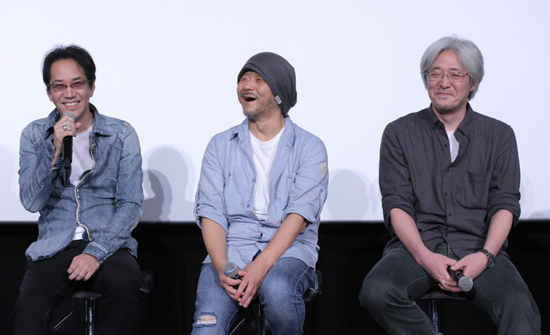