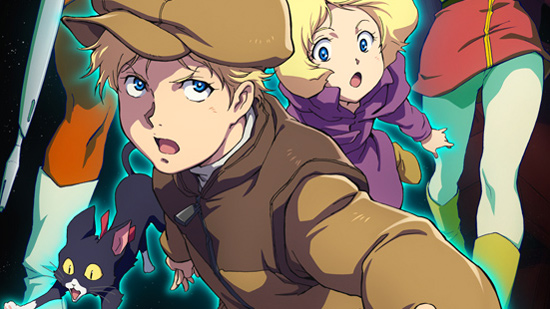 Gundam Unicorn’s 7th and final episode came out a few weeks ago, which means Bandai’s kicking the marketing machine into high gear with a 90 second promo for the next big thing aimed at old-school Universal Century Gundam purists — the anime adaptation of Gundam: The Origin.

For those wondering, The Origin was a manga re-imagining of the original Mobile Suit Gundam TV series from 1979, written and drawn by Yoshikazu Yasuhiko, the guy who handled character designs for the original series and — wouldn’t you know it — is now a superstar manga author who primarily draws biographical comics about Joan of Arc and Jesus.

Besides being a stunningly gorgeous work of comic art, The Origin also went back and filled in a lot of backstory on characters from the original series, changed a few plot points and generally had a thicker, crunchier atmosphere.
It’s a teensy little bit like the manga version of Evangelion, which was similarly drawn by the show’s character designer and had all sorts of differences with the TV show, but The Origin had the hindsight of multiple decades guiding Yasuhiko’s hand, and it shows in the final product, one of the best Gundam anythings ever made (feel free to argue about this in the comments, of course).

So what about that anime adaptation? The 90 second promo reveals the series will be split into 4 parts, beginning next Spring with “Blue-eyed Casval,” telling the story behind the boy who will eventually become Gundam’s morally ambiguous super-villain Char Aznable.

The promo also features a lot of CG robots in it, which has some folks worried that Sunrise’s traditional 2D robot drawing expertise is being dumped into the next season of Gundam Build Fighters instead of The Origin.
Considering the series isn’t coming out until next year, it’s a little early to say. Knowing old-school Gundam fans, though, someone’s going to be deeply unhappy about the results, somewhere. So it goes.