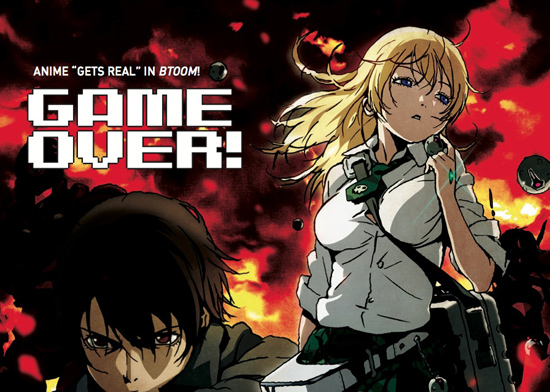 The contrast between real and virtual life can be stark. One can be a complete stud online and a loser in the real world, but what happens when those lives collide? In the latest issue of Otaku USA magazine, Danica Davidson had a helluva time with BTOOOM!, which weaves this familiar premise with the trappings of its hyper-violent title game. This isn’t your average leap into a fantasy MMO; BTOOOM! lives up to its name, and it’s blow up or be blown up on this island.

Just as the same person can be a total shut-in, while managing to craft some gregarious alter-ego on the Internet, BTOOOM! uses backstories to show how all manner of folks reside behind the relative anonymity of usernames and in-game avatars. Some of the backstories are unsettling—the actions of a few make even protagonist Ryota Sakamoto’s game-world wife afraid of him once they finally meet—but that’s representative of the series’ harsh virtual reality.

Danica digs into all of this and more in her feature, so be sure to pick up the latest issue for the full word on BTOOOM! and much more.