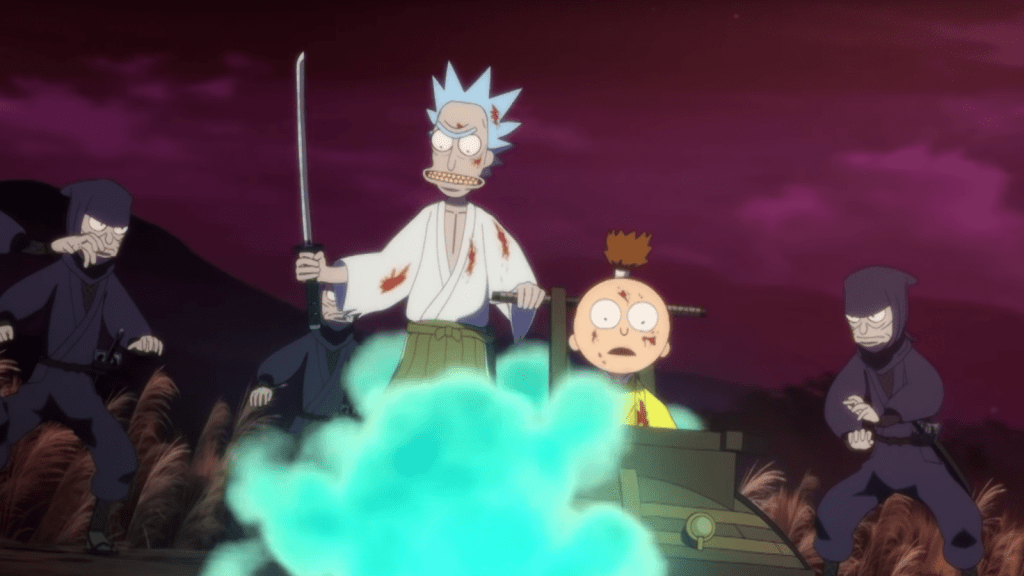 Kaichi Sato is a director of both anime and live action films. After he began doing short works for Adult Swim, he got the opportunity to make the “Samurai & Shogun” Rick and Morty anime that’s available on the season four Blu-ray. Otaku USA talked to Sato about his various projects and where you can see them, the influence of Lone Wolf and Cub, and how he’s planning a sequel to Samurai & Shogun.

What was your process for creating the Rick and Morty anime “Samurai & Shogun”?

This project was not just simply about adapting Rick and Morty into the Japanese style, but instead my aim was more to express the hybrid of Japanese and American animation and made efforts with the staff to do so.

First, I watched and reviewed all the episodes of Rick and Morty and the original and movie version of Lone Wolf and Cub and pulled out the details I wanted to use to write the overall composition and screenplay.

Then, I drew the rough draft of each of the cuts. After that was what you would call the animation work process from storyboard on by DEEN DIGITAL. However, there were many unprecedented endeavors such as expressions that involved bloodshed, the overall color tone, the light source setting, sound effects, etc. and it became a series of trial and errors until the end.

When I received this project from Production I.G USA, I submitted several different ideas such as fusion robots and things set in Akihabara. But right after that, I suddenly had a flash of an idea that Rick and Morty’s base format of “an adult and a child duo going on wild and radical adventures” was close to Lone Wolf and Cub and thought it would be interesting to mash them up. From there, I was given some time to draw a second draft and when I submitted it, I was given an OK in one shot.

In the first place, my late father was a huge fan of Lone Wolf and Cub, so I was quite familiar with the comic and video versions. (There was a father and son who thought my father sort of believed he was the Ogami Itto lol).

When I was a kid, I remember watching the movie version with my father and being shocked by the bloodshed and decapitation scenes, and so this time I felt like I was working on the production while conversing with myself from that time.

What other work have you done for Adult Swim?

The first one was an ID I produced called “Yaki-gote” and then I made the Rick and Morty Season 3 promo CM “Gear Head.”

Rick and Morty wasn’t introduced much in Japan at the time, so when I saw it for the first time, I instantly became a fan. It was the first time I got this hooked on an American animation since Power Puff Girls.

It included quotes from Zardoz and was a work that was quite close to my tastes, so I definitely wanted to get involved in it again if I had the opportunity.

What can you tell us about your other films and where people can watch them?

The first animation work that I produced was “CannibAlien’ (30 minutes).

The next one I made was “Dynamic Venus” (20 min). Each of these is a work of hard comedy in which various social issues and the psychology of the individuals and the general public surrounding them are satirized into black humor in the style of horror and hero movies.

You can watch these two works on YouTube and Vimeo.

The next one, ANNA kidnapper (27 min), was a retro fashionable animation work that was made by mashing up 1960s French and British movies. In Japan there was a theatrical release and Blu-ray software sales and distributions; however it is currently not available in North America. I’m planning to make this publicly available on YouTube and Vimeo soon.

ANNA was frequently screened in 2019 at multiple film festivals, mainly in NY and Atlanta, so some of you may have already seen it.

My latest work so far is “Love Hotel” (25 min), which is a live-action work that makes heavy use of CG. It’s a horror comedy where a female alcoholic psychic exorcises ghosts that appear in Japanese love hotels.

I actually used to direct live-action films in the past, but lately I’ve been continuously working on animation, so this was the first one I made in a long time.

I’m planning to release it out in film festivals in various countries, mainly North America, so if you see the title out there somewhere, please give it some attention.

Also, if there are people or companies who are interested in the distribution and commercialization of these works, please contact us!

Each of your films is different, but they are all thought-provoking. What do you want to accomplish with each of them?

I’m happy to hear you say that. It’s merely a category of entertainment, but things that are taken for granted in society or makes our minds go blank in the case of my works, killing and eating creatures, violence in the name of justice, binding and jealousy that’s justified by love. I raised issues from various angles in the stories based on these concepts.

However, instead of denouncing these themes, I kept it in mind to design it to leave the answers to the audience. I’m just hoping that the audience noticed something after watching…

However, when it comes to thought-provoking works, in the current situation, isn’t Rick and Morty the strongest? Lol.

That’s why I was earnestly able to devote myself to the action when making the sideline that is “Samurai & Shogun.” I’ve been a bit big-headed lately, so in a good way, I think I was able to move forward as a creator. To all those who were involved and those who have seen it, I thank you again from the bottom of my heart.

Is there anything else you’d like American anime fans to know about you?

We’re currently planning a sequel to “Samurai & Shogun.” I have a number of good ideas, so I definitely want to make them happen! Also, this is just a dream of mine, but someday I would like to participate by implementing my own ideas into the main story of Rick and Morty.

As a Japanese animator, I think I’m a person who’s quite on the alternative side, but going forward, I would like to work for both major and independent works, so I hope you will keep me in mind.

Dive into the Best Aniplex Deals of the RightStuf Holiday Sale!
The Eyes Have It! Check out Some of Our Favorite Anime Eyes