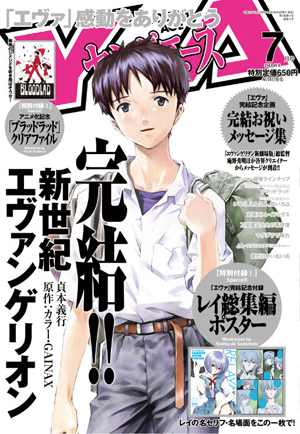 Manga series can’t last forever – although they can certainly try – which leads us to the news of two long-running manga series meeting their inevitable ends: Atsushi Ohkubo’s Soul Eater and (gasp) Yoshiyuki Sadamoto’s Neon Genesis Evangelion.
Soul Eater has been running in Monthly Shonen Gangan magazine since 2004, the same magazine that played host to Hiromu Arakawa’s Fullmetal Alchemist, and was adapted into a 51-episode TV anime in 2008 which wrapped the story up independently of the manga series. Heck, it’s running on Adult Swim in the United States right now!
According to the July edition of Shonen Gangan, Ohkubo is wrapping the story up in two more chapters, ending the series in August barring any unforeseen complications. Ten years and 23 collected tankobon volumes. Not a bad run.

The Evangelion manga, on the other hand, was always something of a strange case, originally seeing its debut in Shonen Ace magazine a full 10 months before the start of the TV series, with new chapters appearing in fits and stops over the course of the next 18-odd years due to author Yoshiyuki Sadamoto’s other work commitments in the industry.

So, the big piece of news about the end of Evangelion: the final chapter ran in the July issue of Young Ace, and it’s pretty much totally sold out across Japan. As such, Kadokawa Shoten has announced they’ll be reprinting the final chapter in the August issue of the magazine, set to go on sale July 4.

This isn’t something that happens every month – the final chapter of Fullmetal Alchemist was reprinted in 2010, for example, and a chapter of Mitsuru Adachi’s Mix was reprinted in Shonen Sunday, but that’s about it for recent examples. Eva mania is just that powerful.

This story originally ran in the 6/11/13 issue of the Otaku USA e-News
e-mail newsletter. If you’re not on the mailing list, then you’re reading it late!
Click here to join.