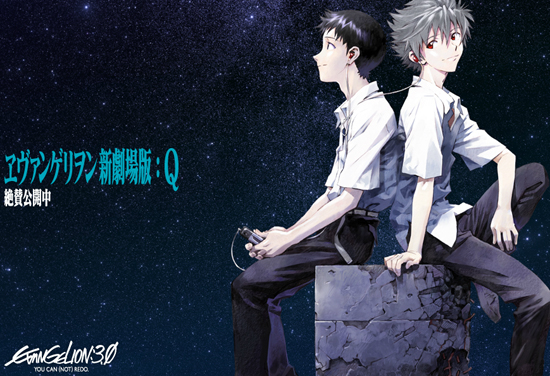 Evangelion 3.0: You Can (Not) Redo is still playing in Japanese theaters as of this writing. The film has been out since mid-November, which means that it has been playing for about 3½ months now. Weekday showings were apparently still sold out at the end of January. The Blu-ray home release is scheduled for April 24th, a mere five months after the initial theatrical release. Promotional campaigns are still in full swing, with everything from towels to cup ramen tie-ins still available at convenience stores.

Literally everything that could ever be said about the film has been said, from fans claiming it to be the “best thing evah” (sorry) to Evangelion fans being derided as “kimoi” (disgusting) by tabloids. The general consensus of the film still seems very much split: the film currently holds a three-star average rating on the user reviews section of Yahoo! Japan Movies, with individual reviews ranging anywhere from the lowest 1 star all the way to the highest of 5 stars.

Of course, part of the fun of Evangelion is speculation and discussion with fellow fans. As always, crazy theories and Internet blogs asking “what does it all mean?” have been rampant across cyberspace. One blog dissected the significance of the letter Q in the film’s Japanese title: when substituting “Jo” and “Ha,” names of movements within traditional Japanese arts (and the Japanese titles of the previous installments), with corresponding letters of the alphabet, which would be “A” and “B,” the writer found that there are 14 letters separating “B” and “Q.”  14 equals the number of years that pass in the Evangelion universe between film 2 and 3. And then of course the letter after “Q” is “R”…

What’s been more interesting are the reactions the film has received from various critics and notable figures in the anime industry.  In particular, the comments of director Mamoru Oshii (Ghost In The Shell) received significant attention, when in a mail magazine sent out at the beginning of December, he criticized Evangelion for being “all style and no substance.”  He goes on to say that it’s “an endless repetition of stereotypes and facsimiles of things we’ve seen elsewhere,” and that Evangelion creator Hideaki Anno “has no themes or motifs.” He draws comparisons between Anno and another acclaimed anime director, Hayao Miyazaki (Princess Mononoke, My Neighbor Totoro), saying that while Miyazaki and Anno are similar in their earnestness, Miyazaki seems to be confident living in the “real world,” while Anno is more confident outside it.

Similarly harsh criticism was reported from cultural critic Hiroki Azuma, who tweeted quickly after his first viewing of Q that it “was boring” and that he “didn’t feel anything”.  A conversation between Azuma and Toshio Okada, co-founder and former president of Gainax, was later streamed live on Nico Nico Douga, with Okada comparing the new Rebuild films to the Star Wars prequels: “Lucas went crazy because he kept doing the same thing over and over,” he says in the video, and asks “someone make Anno do something else.” Azuma elaborates on his initial reactions, mentioning how while Jo and Ha seemed to be striving to be entertainment, Q suddenly catches the “Eva disease” and quickly subverts the viewers’ expectations, as if Anno is saying “you’re expecting me to subvert things right? Well, I’ll do just that,” and ultimately it seems to be “subversion just for the sake of subversion.”

The split reactions among the general public, over-analysis amongst the hardcore, and harsh critical reviews haven’t dampened the film’s box office success. The film has raked in more than 5 billion yen (approximately 50 million US dollars), compared to the previous installment’s 4 billion. One of the reasons the film has had a successful long run in theaters has been Studio Khara’s clever marketing techniques, in which they have presented numerous free giveaways for moviegoers each month. These items range from exclusive bandanas to postcards and keychains – anything that will entice Eva fanatics for seconds, thirds, and beyond. Brief rumors that the film had been altered with new and different scenes since its initial release, which were later proven to be false, certainly also contributed to the number of repeat viewers.

Perhaps the biggest thing on the minds of Evangelion fans at the moment is the release date of the final film. Astute fans will probably have noticed that, while initially claiming the final Rebuild film will be out in 2013, the official Evangelion website has quietly retracted the statement on their page for the final film, replacing a previous placeholder image reading “Evangelion Shin-Gekijouban: ? Out 2013” with simply the newly revealed title, Shin Evangelion: Gekijouban :||, with no concrete release date.  While delayed release dates are nothing new to Evangelion and anime in general, the sudden retraction was both a puzzling and disappointing move to say the least.

The accelerated home release and ongoing promotional campaigns may, however, suggest that the final film may be closer than we think. According to Rebuild animator Tadashi Tsuramatsu, it was already part of the plan to release the 3.0 Blu-ray as fast as humanly possible, well before the film’s release.

Is it possible that we’ll see Evangelion: Final before the end of the year? Khara’s retraction of the 2013 release date suggests otherwise, but it’s possible that they plan on going all out on the last two installments. Remember that the last two films were initially supposed to be released simultaneously as a double feature. While the initial plans for the whole Rebuild project have obviously gone completely astray, it is still possible that the two films have been in production concurrently. There will likely be a clue as to how far the final Evangelion is in terms of production with a revamped “next episode” preview at the end of Evangelion 3.33, the home release version of Q.

Whatever the case, Khara should be a bit wary of Evangelion fatigue: the franchise has been everywhere in Japan these last couple of months, with more people seemingly aware of the property through advertising and merchandise than through the works themselves. The release of Evangelion: Final will undoubtedly be a massive event in Japan, one that has been built up so much for years through hype and constant delays. Hopefully, it will be a unique, celebrated moment in Japanese pop culture, and not the sinking, balloon-popping, death threat-filled hate-fest that Death and Rebirth and The End of Evangelion ended up being more than 15 years ago.

But one can never be too sure of anything related to Evangelion.  It could very well be, as they say, all “going according to plan.”

R.I.P. Gorō Naya, Voice of Lupin’s Zenigata and More
Miss Muromi on the Beach Preview Comes Up for Air