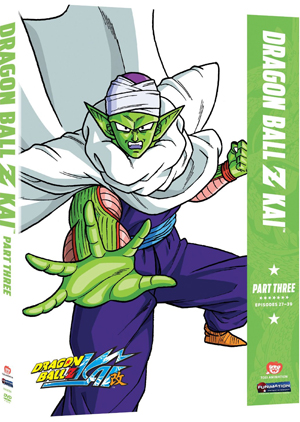 Universal domination is a bad thing, but try telling that to the villains of Dragon Ball Z Kai.

Those special Dragon Balls on the planet Namek sure are in high demand. Gohan and Krillin want them to bring back the dead (which isn’t as creepy as it just sounded, I promise). Actually, they want to resurrect their dead friends from Earth who Vegeta killed. But Frieza and Vegeta want the Dragon Balls for more sinister reasons. You know, immortality, taking over the universe, yada yada yada. Goku is flying through space to help, albeit he doesn’t make it to Namek until partway through this volume. Until then, he exercises in his spacecraft and uses Senzu Beans to keep him going.

And then Frieza gets the Ginyu Force involved to help him. Vegeta, Gohan and Krillin have a common enemy in Frieza and the Ginyu Force, so Vegeta is actually willing to come over to the side of good for a while, though he’ll remain gruff and critical about things. The Ginyu Force is an interesting group—on one hand, they’re impressive warriors, and on the other hand, well… they’re a bunch of flamboyant dorks.

Gohan and the others are still trying to help their dead friends, but it might not be that easy. Even with the Dragon Balls it turns out they can’t bring everyone back to life. They’re going to have to strategize about that while still fighting off the bad guys and staying alive themselves.

We’re now in part three of the specially edited Kai series and this takes up episodes 27 to 39. Kai cuts down on the original, getting to the point more quickly. There’s still a fair amount of fighting in this volume, so that will either be exciting for the audience, or it might still seem as if there’s excess in the storyline; it depends. It does seem that characters keep getting stronger, because there’s increasing talk about Super Saiyans. Goku may have been buff before, but you haven’t seen anything yet.

There is a lot going on, and this volume ends with promises of more Frieza action in the next. This is an enjoyable series to watch, and while some people won’t like the cuts (and they have a point), odds are this will attract more people to the Dragon Ball franchise.

Higurashi When They Cry: Beyond Midnight Arc 2
Junji Ito’s Gyo Gets Animated