Higurashi When They Cry: Beyond Midnight Arc 2 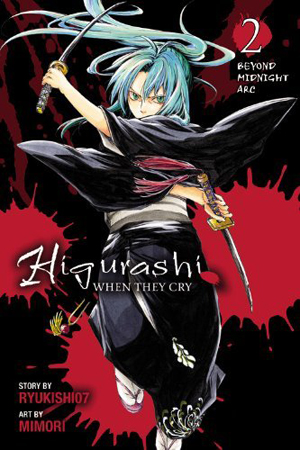 Several people are in a house in the cursed village of Hinamizawa during a stormy night. One of them gets murdered and the murderer is among them.  In Hinamizawa, this sort of awful thing was bound to happen.

Arakawa came to Hinamizawa to write about it. Akira came there to kill himself but changed his mind at the last minute, though he initially lied to the others about his reasons for being in the village. But they’re not alone. Mion is a mysterious woman with a katana. Takumi and Yae are boyfriend and girlfriend, but Takumi is strangled and the others are frightened by who—or what—could have done this.

Takumi was killed in the last volume, and in this volume we learn the identity of the killer; first through clues, then through a detailed confession. Somehow Takumi talks from beyond the grave to end any doubts as to the identity of the murderer, though it’s too late to bring him back. Characters are scared to hear the voice of a dead man, only for Mion to say coolly, “We’re on the border between the living and the dead.” Hinamizawa is like no other place on Earth, and even though this is a graphic novel consisting of black and white illustrations, somehow we feel it.

But even once that murder mystery is solved, the danger is far from over. There are assassins after Mion who will also kill any people with her.

The previous volume was very creepy, letting readers’ imaginations run wild. Now, as mysteries are solved, some of the creepiness factor isn’t so strong. However, this is still a dark horror book. It’s not as gory as some other Higurashi volumes, but it yields interesting background stories on some of the characters. That gives this volume some added depth and intrigue. Mion is an interesting character, and the background stories for Akira and Yae also add something to the feel of the story. Some of the ghoulishness goes away for part of the book as it concentrates more on realistic matters. In other words, instead of curses we have assassins.

However, if you think Higurashi has lost its supernatural edge, don’t worry. A twist at the end brings back the ghostly side of Hinamizawa Village. Higurashi does a good job at playing with readers’ minds and letting us guess what’s real and what’s not.