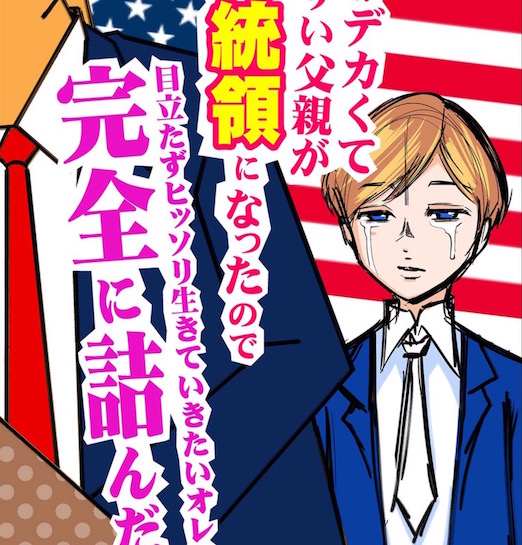 News about President Elect Donald Trump might not be the exact type of item you come to Otaku USA for, but thanks to Japan we have some lighter fare to focus on for a moment. If you ever wondered how the election cycle affected Trump’s youngest son, Barron Trump, well, according to a few Japanese Internet users he’s taken on the life a bishonen (“beautiful boy”) manga idol.

If you’re having trouble envisioning this, manga artist Yuusuke Hori did the heavy lifting for the rest of us. In what sounds more like the latest hit light novel series, the fictional manga pictured below translates to, My loud, annoying dad is President, so the quiet unassuming life I wanted is completely over.

The first chapter is, naturally, titled “Also, my mom and sister are too sexy.”

You can see the inspiration for the cover in the photo below, which was taken during Trump’s victory speech. Poor Barron looks absolutely wiped…