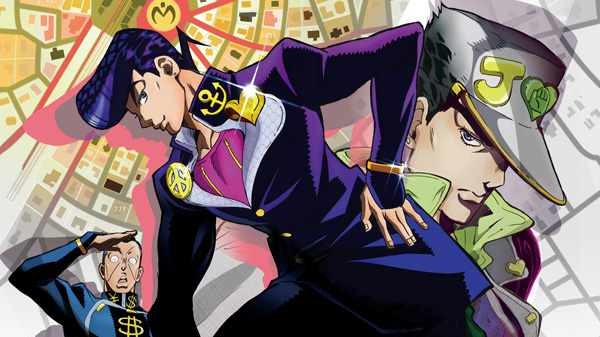 After so many piecemeal productions and so much manga left uncovered it feels both strange and amazing to realize that we’ve entered the fourth year of televised JoJo’s Bizarre Adventure anime. The current season adapts “Diamond Is Unbreakable,” the fourth major chapter of the Joestar family chronicle, and is the first time that any of the series beyond Stardust Crusaders has been animated. Each segment of JoJo’s Bizarre Adventure follows a different member of the Joestar family in a new strange situation. There’s always some level of continuity in the Joestar bloodline and some recurring characters, but the largely new cast and objective make any new portion an acceptable jumping-on point if you’ve never watched before.

Ten years after the showdown with Dio in Egypt, Jotaro Kujo undertakes a rather more mundane (if awkward) task. His grandfather Joseph Joestar had an affair with a woman in Japan and fathered an illegitimate son. With Joseph getting on in years, Jotaro travels to the small town of Morioh to meet this newly discovered relative and talk inheritance. Enter Josuke Higashikata, a well-meaning high school student with the sweetest hairstyle around (warning: if you trash talk his righteous pompadour, he will fight you). He isn’t precisely a normal high school student given the Stand he acquired during Dio’s shenanigans; like Jotaro’s Star Platinum, Josuke’s Shining Diamond punches things fast and hard but has the additional ability to repair anything that’s been damaged or broken. The only catch is that Josuke can’t repair himself. 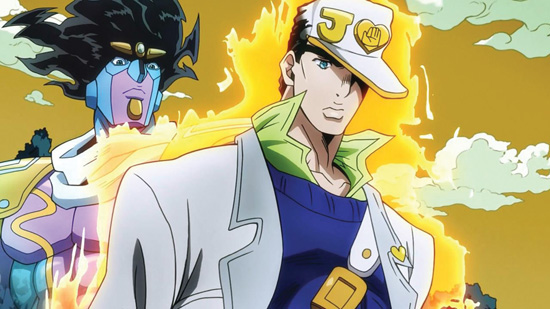 Shortly after Jotaro’s arrival, Josuke and his new (very small) friend Koichi Hirose begin encountering a variety of Stand users. Why are there so many in such a small town? Does it have anything to do with the worryingly large number of violent deaths occurring recently? Josuke and his friends must enlist Jotaro’s help to confront a parade of enemies, unravel the mystery of Morioh’s influx of Stand users, and stop a serial killer.

All of the major JoJo’s Bizarre Adventure chapters introduce new characters and storylines, but “Diamond Is Unbreakable” represents a slightly more significant break point where the series partially reinvents itself. The divergence is less severe than the transition from Hamon’s martial arts action to the use of Stand superpowers but presents notable stylistic differences. The prior two chapters of the series have been globe-trotting adventures, taking our heroes through multiple countries and battling megalomaniacal villains bent basically on becoming gods. With “Diamond Is Unbreakable” Araki does the inverse, confining the characters and events to Morioh, a single small town. More Twin Peaks than Indiana Jones, as it were. 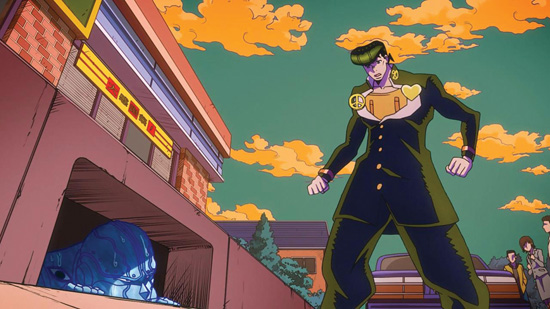 In keeping with this smaller physical scale, “Diamond Is Unbreakable” continues to push the envelope on weird Stand abilities, ramps up the use of horror motifs and techniques to draw out tension even with relatively small stakes or scope, and explores villains at a more individual level. In the past, the Joestars’ opponents were either the “big bad” world-conquering villains or a sequence of lackeys sent by Dio. Enemy Stand users encountered in Morioh operate individually and are driven by intimate, very human flaws—by lust and envy and greed. Sometimes they’re dangerous; sometimes they’re a nuisance. It lends more variety not only to the stakes of the battles but to the desired outcome, as Josuke and his crew have to figure out a way to stop the user nonfatally.

JoJo’s Bizarre Adventure avoids the dullness and power creep endemic to so many shonen fighting manga by configuring the battles as a puzzle; each Stand ability is specific and has particular limitations or weaknesses, and the path to victory requires the characters to determine how to exploit those limitations while protecting their own weak points. To maintain this, especially on Morioh’s smaller stage, the abilities and limitations become weirder and more specific. In keeping with the personal nature of the Stand users’ motivations, many of the abilities reflect or amplify the character flaws of that opponent. A con artist’s Stand helps him to control and extort others, for instance. 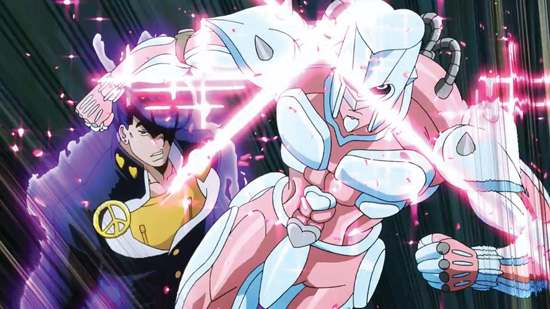 Urban legends, horror, and mystery have always been a key component and influence for JoJo’s Bizarre Adventure, from Phantom Blood’s Victorian gothic trappings and vampires to Stardust Crusaders’ use of killer dolls, zombies, and a Freddy Kreuger-esque Stand. “Diamond Is Unbreakable” brings this aspect to the forefront. Araki’s ever-present fight scene gore, in concert with increasingly odd Stand powers, transitions perfectly into body horror: living hair, multiple varieties of body modification, the ability to peel someone open and literally read them as a book.

Some feel that this inversion is a disappointment and that “Diamond Is Unbreakable” represents a low point in the series, but I strongly disagree. Don’t get me wrong, I love the excess of other parts, the scope and variety afforded by travel (whether around the globe or across 19th-century America on horseback). But the limitations at work in Part 4 really highlight some of my favorite qualities of the entire series. My favorite episode—and one of my favorite things in all of JoJo—is the 10th, “Let’s Go Eat Some Italian Food.” It’s an episode I’m not sure would have happened in another JoJo chapter with their expanded scale, not simply for its localized setting (we’ve had confrontations in airplanes and hotel rooms before, for instance) but due to the ambiguity of the encounter and its surprising resolution. 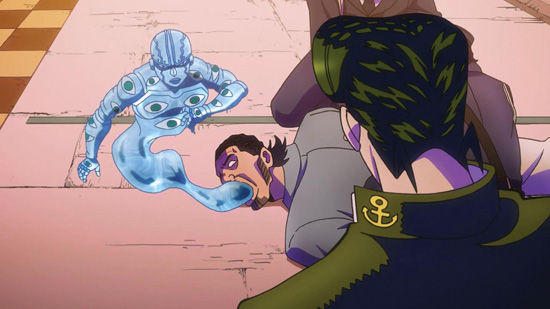 Between its inventiveness and the charm of the characters, I love “Diamond Is Unbreakable.” David Production has really hit its groove, particularly with this season so far. The character designs are looking better than ever due to both the improving artwork of the original manga (which the studio has consistently attempted to evoke, if not directly reproduce, in its designs) and the designers finding a great median between character model detail and expressiveness. They’re really playing around with color schemes, dramatic rather than natural lighting, and some very interesting camera angles and transitions; it sells the emotional, visual, and violent melodrama of the source material extremely well. I feel, basically, like the staff has gotten comfortable and are moving past just getting the manga pages onto the screen and into really enjoying themselves.