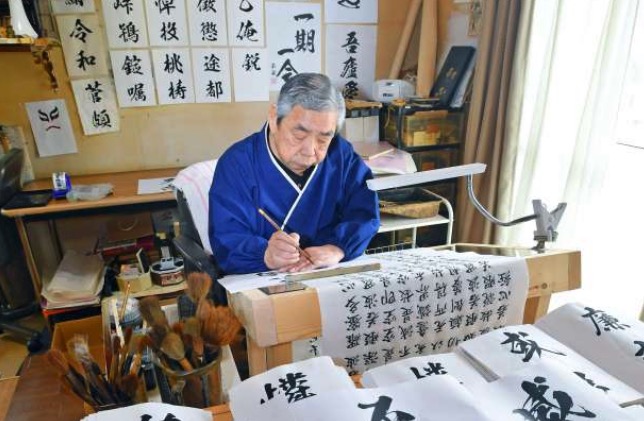 Tsunanori Sakaguchi, who used the name Eisen Tsunanori for his work, might not be a household name, but his talents as a calligrapher are shown in the ultra popular anime Demon Slayer. That means millions of people around the world have seen his skills. But he’s in the news right now for a sad reason: he passed away earlier this week, at age 86, from heart failure. He had been hoping to continue his calligraphy work until the age of 90.

During his years of working, he was the mastermind behind about 60 different calligraphy fonts. That encompasses 400,000 different characters!

He had his share of fans in Japan, and the fonts he created were implemented in everything from games to TV shows to books. He learned that Demon Slayer was using his fonts when his grandson told him. His fonts Kokuryu-sоu and Shinryu-sоu were included in the Adobe Fonts service in 2021 after getting fame in Demon Slayer.

He was born in 1935 and was artistic from an early age. When he was only in fourth grade, he sold his paintings and gave the money to help his school. As an adult he became a sign maker. His career with calligraphy really took off in 2004. In 2013 he created the font production and distribution company Shоwa Shоtai. He would draw characters every day, sometimes up to 100 of them, so he could invent new fonts.

Funimation gave this description of the Demon Slayer anime:

“Bloodthirsty demons lurk in the woods, and nobody dares to venture out at night, save for the demon slayer of legend. Surviving in this harsh world, young Tanjirou takes it upon himself to protect his family–until the day that everything is taken from him in a vicious slaughter. Now, all he has left is his sister, and she’s not even human anymore.”