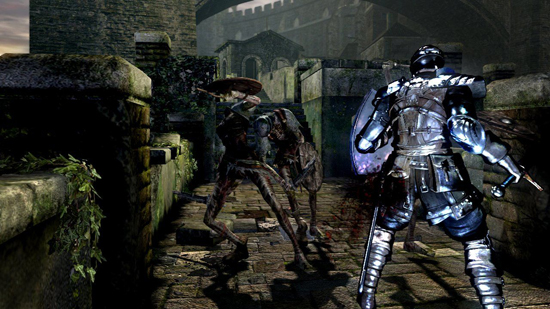 You can say Dark Souls is “hard,” the whole Internet has, but let’s not stop there. Let’s call Dark Souls particular. Let’s call it fussy. It requires patience. Sometimes it requires too much patience: it’s ponderous. Sometimes calling it ponderous is giving it too much credit: it’s glacial. Awkward, circle-strafing combat against a single enemy can take an entire minute to unfold. This is not a boss fight. This is a regular guy, a skeleton you’ve painstakingly drawn through a hallway and into a wide-open courtyard where you’ll have room to swing your sword.

After you kill him, assuming you don’t give him room to stun-lock you to death, there are three more skeletons waiting for you in the next room. Each will need to be drawn out and dispatched in the same manner. Attracting the attention of two at once is basically a death sentence. Even if you’re skilled enough to keep them both in front of you, defending against two enemies saps stamina to an untenable degree. You won’t be able to block. You won’t be able to evade. You will die. 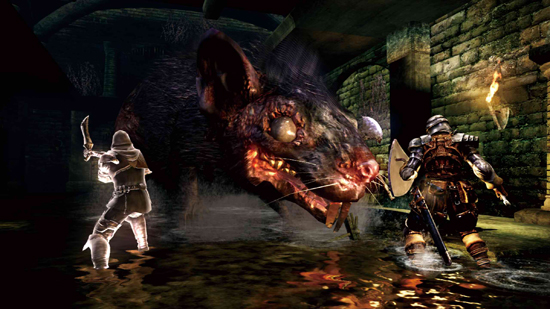 Except looked up the stairs and seen the barrel waiting for you.

Playing demands paranoia. You’re forced to think that every staircase has a flaming barrel spiraling down toward you, that every ceiling has a globulous mass waiting to drop down and engulf you, that every chest is a mimic ready to swallow you whole.

That kind of cautious play requires not only suspicion of everything, but also an insane time commitment. Progress is slow and sometimes painful. The dividends from this investment are often powerful. Twenty hours into the game I fall down a hole in a sewer. The light is weaker down here and I can barely make out the shape of petrified adventurers all around me. A googly-eyed frog-like creature rounds the bend and I am filled with a sense of dread I haven’t felt since the PlayStation. I remember what it’s like to be fifteen years old, playing Resident Evil, chased by zombie dogs. I remember what it’s like to feel the decks stacked against me. I am stressing out. 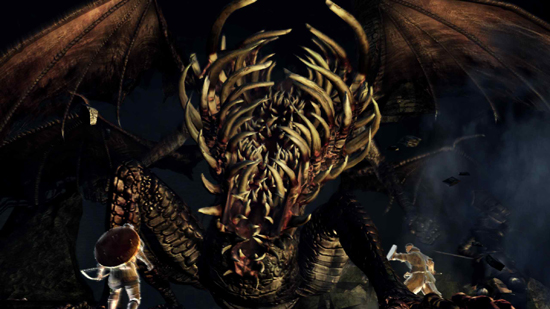 It feels so good.

I hack my way out of that tomb. My hands are sweating on the controller, but I’m largely no worse for the wear. It feels like I have wrung out a great victory, not just because I found an amazing ring in the tomb of the basilisk monsters, but because I clawed my way up from the depths. And I did it without an FAQ. I did it without YouTube or a Wiki. Just my brains, my smarts, and my shield always at the ready. I feel like a hero.

But these pay-outs don’t work in repetition. Several hours later my patience has worn thin. The boss has killed me (again) and I’m running forward at full tilt back to his room. I fall down that same hole I dodged a dozen times now, back down into the basilisk’s domain. I, having divined a pretty reliable strategy for dealing with them, charge forward and swing my sword with abandon. A bit too much abandon. I allow myself to be petrified. My character is now cursed and must spend a veritable fortune in order to cure it. I spit and swear. The knowledge that the situation is no one’s fault but my own is cold comfort. Though the game did not cheat, I feel betrayed. And running through that sewer for the tenth time does not inspire the same dread. Mostly, I’m just bored. Mostly, I’m kind of annoyed. 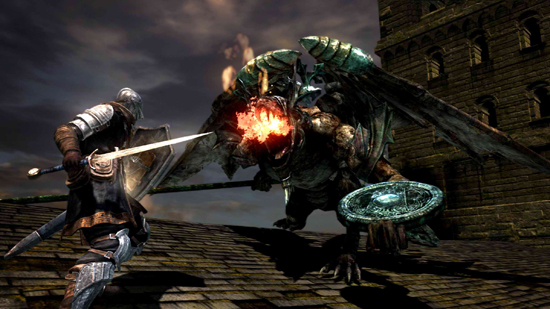 So let’s not dismiss the people who hate Dark Souls; they are not without their reasons. The camera sucks, the collision detection sucks, and god help you if you have to jump anywhere. And, occasionally, the game does cheat. A pair of arrow shooting knights knocked me off a precarious rampart four times in a row. In my fragile state that was three times too many.

It happens rare enough that I can tolerate it, but it treads the line. In exchange I get that permeating sense of despair and, when a difficult boss dissolves into a pile of souls at my feet, that overwhelming catharsis. A two-on-one boss fight kills me seconds before I deal the final blow. From then on, each time they thrust their spear or swing their hammer I forget how to breathe.

Is that what a video game is supposed to do? Not exactly. Not in such a cumbersome, annoying, roundabout fashion. Not with min/maxing weight limits and input lag and spastic lock-on targeting. But this is the truth of it: the tension I felt playing Dark Souls was worse than any Resident Evil, worse 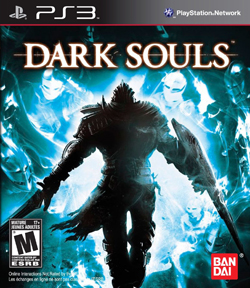 When I finally beat the duo boss I put down the controller and let out a hard sigh. All my muscles relaxed at once. I let out a single swear under my breath. I didn’t feel victorious, not exactly. I felt like I had finished something. I felt like it was over. I felt like I had overcome. When was the last time a video game made me feel that way? Maybe never.

Saying “it’s hard” and leaving it at that feels a little shallow.