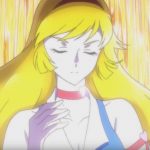 Last week brought with it the reveal of Cutie Honey Universe, the latest in a series of 50th anniversary projects celebrating legendary manga creator Go Nagai. The official website followed that up with the very first teaser, giving us a quick 40-second taste of what anime studio Production Reed has cooking.

As previously reported, Akitoshi Yokoyama (Photo Kano) is on board as director, with Natsuko Takahashi (Urahara) on series composition and Syūichi Iseki on character designs and chief animation direction. The anime is currently set for a 2018 debut, and you can see the debut footage below.