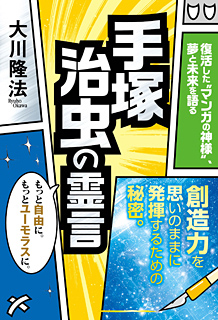 Osamu Tezuka: legendary creator of Astro Boy, Black Jack and Phoenix, father of the anime industry, and… spectral spokesman for a Japanese cult?

Controversial religious organization Happy Science has published a new book entitled Osamu Tezuka’s Ghost, in which they purport to have heard the words of the deceased God of Manga, and his daughter is not exactly happy about it.

The book was written by Happy Science leader Ryuho Okawa, who claims to have held communion with Tezuka’s spirit and asked him, among other things, how he was able to create so many classic manga and what he thinks of modern manga and anime.

Yesterday Tezuka’s daughter, Rumiko Tezuka, fired off a series of tweets about the whole thing, in which she revealed that she had stopped Happy Science from unauthorized use of Tezuka’s photos and reproductions of his manga, but that stopping the publication of the book itself was more difficult.

Tezuka also wrote that it’s extremely obvious to anyone who knew her father that the style of talking and thinking displayed in the book is nowhere near what he was like, and that she’s trying to have a good sense of humor about the whole thing, saying that rather than suing, it’s easier just to laugh the whole thing off as parody.

Chapters titles in the book include “what did you think of the movie version of Buddha?”, “what is the secret to being prolific?” and “are you really a space alien?”

Happy Science claims to have summoned “over five hundred spirits” since 2009, including Steve Jobs, Mother Teresa and the Guardian Spirit of Vladimir Putin.