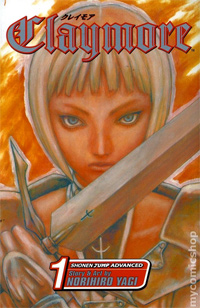 October will see the end of the fantasy manga Claymore, which began life in Monthly Shonen Jump back in 2001 before switching to Weekly Shonen Jump and then Jump Square. The final chapter, which is being billed as the “grand finale,” will appear in October 4th’s Jump Square.

Claymore, written by Norihiro Yagi, is the story of Clare, a so-called Claymore, hunters of shape-shifters called Yoma who prey on humankind.

The first 11 volumes of the series were adapted into a 26-episode anime series in 2007 and released by Funimation in America.

Viz is currently serializing the Claymore manga, of which there are currently 26 volumes in Japan.