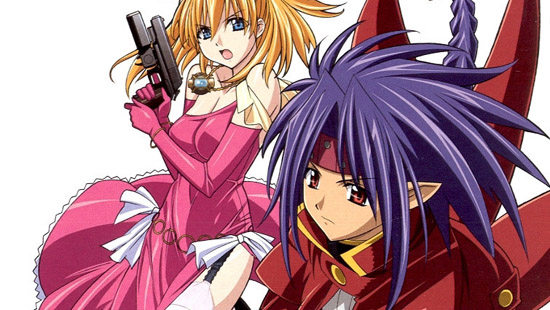 It’s the roaring twenties in New York, and the best way to fight the baddies is with a gun-toting nun and a devil.

That’s actually how it works in Chrono Crusade. Rosette is the ditzy, clumsy and loudmouthed (if well-meaning) nun who is always getting yelled at by Sister Kate for her inevitable screw-ups on the job. At Rosette’s side is the purple-haired demon Chrono, who, despite looking awfully innocent, still has incredible power inside him. Chrono’s awesome powers come out on Rosette’s command, yet she’s the one who suffers for this. It drains her life in such a way that the teenage nun might not make it to thirty.

There are always problems for them to deal with (they do live in New York City), but perhaps the biggest is the devil Aion, who has some pretty evil plans up his sleeve.

In the midst of saving the world from destruction, Rosette also has family issues. Her young brother Joshua has been missing for years (hence the flashbacks) and this is a continuing theme that runs through the series. Despite this, when a German witch is bemoaning how she’s been searching for someone, Rosette is surprisingly unsympathetic, and it’s the devil Chrono who has to bring up the fact she’s been searching for her brother.

Chrono Crusade comes from the same creators as Afro Samurai and Trinity Blood, as the back of the case lets us know right away. I can see some similarities to 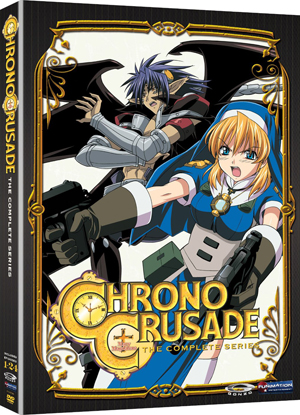 Trinity Blood, what with the supernatural stuff, the creative take on Catholicism, and the nuns who get a little too gun-happy. But this show also reminded me of Excel Saga. Trinity Blood mixed with Excel Saga, anyone? Rosette kept reminding me of Excel, even if she’s not quite down to that level of insanity. Nevertheless, Rosette is indeed wacky; perhaps that’s why Sister Kate spits out her drink when another character speaks of her admiration for Rosette.

While the anime opens as if it might be a comedy, more dramatic elements soon come into play. Chrono Crusade is certainly an offbeat series, juggling the silly with the dramatic, making itself purposefully cheesy and outrageous. It’s not anything I would call amazing, but it’s entertaining if you’re in the mood for something that’s… well… not quite right in the head.