Cheer Along with the Anima Yell! TV Anime in New Promo 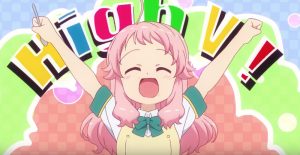 If there’s any series you can count on for being the indisputable champ of cheerfulness for the fall 2018 anime season, it’s Anima Yell!. You can’t get much cheerier than a cheerleading anime, and we’ll get to see how the adaptation of Tsukasa Unohana’s four-panel manga turns out when the first episode debuts on October 7.

Before we get to it, though, another promo made its way online via the official website. Check out more footage along with a sample of the “Jump Up ↑ Yell!!” opening theme and YURiKA’s “Joyful” song below.

Anima Yell! makes its debut in Japan on AT-X, followed by airings on Tokyo MX and BS11, and it’s set to be simulcast on Crunchyroll.

Prince of Tennis Gets Official Store in Shinjuku, Tokyo
Megalobox Punches Its Way to Toonami on December 8