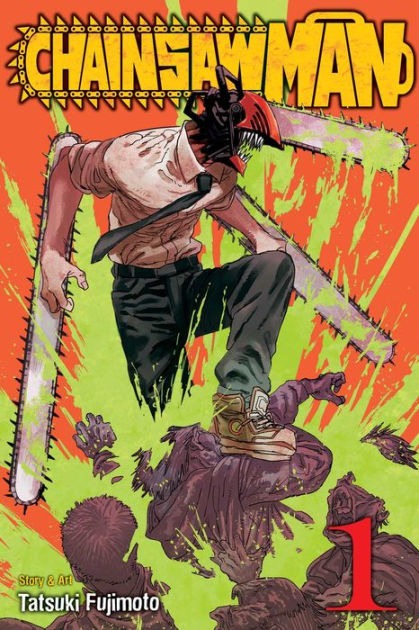 For something a little creepy (and downright bizarre) we have the release of Chainsaw Man from VIZ Media. The main character Denji is a down and out young man who’s so deeply in debt from his father that he eats a slice of bread a day. And he’ll do any kind of work, no matter how dirty. His one companion is a devil called Pochita, who looks like a cross between a dog and a chainsaw. That might sound weird, but he’s actually pretty cute, and Denji treats him like a beloved pet.

Using Pochita’s chainsaw nose, Denji will fight devils. But when devils kill Denji, chop him up and throw him in a Dumpster, Pochita combines with him. This brings Denji back to life, and now he’s a human-devil hybrid who can turn into “Chainsaw Man” when he needs to fight.

The manga is casually gruesome and violent, which fits with the theme, and it also sprinkles in quite a bit of humor. This humor mainly revolves around how desperate Denji is to get a girlfriend, or at least get some action. There’s one female devil hunter he’s really interested in, and a few other characters come into play in this first volume, though readers are still trying to get a grasp on who they are and what to feel about them.

The most emotional part of the story — and yes, there is some true emotion in the midst of hacking and slashing — is the love between an owner and a pet. This is shown primarily through Denji and Pochita and how they end up saving each other. Not only do they literally save each other from death, but their love and companionship help them through the difficult days. Another character alludes to having this sort of love for her cat, and while Denji at first pretends he doesn’t understand, you know that he does.

It’s kind of hard to say from the first volume where the series will go from here, but it’s revealed itself as a bloody, action-packed shonen with some heart showing through the weirdness, and it’s been very successful in Japan.