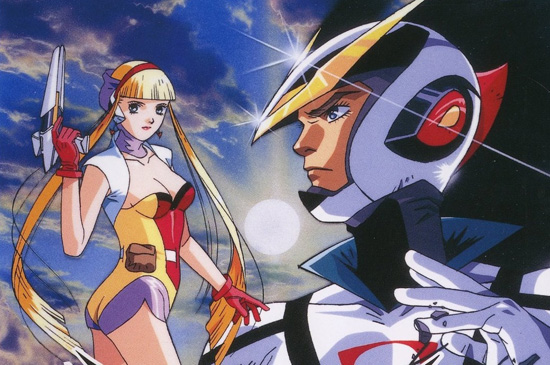 Let’s face reality: although animation studio Tatsunoko Pro is still creating brand-new titles and has existed for over 45 years, their heyday was decades ago. One look at their half of the roster of the recently discontinued fighting game Tatsunoko vs Capcom is all it takes to demonstrate that nearly all of their most beloved creations hailed from years before most people reading this, including myself, were even born. So while it’s true that the practice of remaking hit titles from 20 to 30 years in the past is practically the norm across all walks of entertainment at this point, Tatsunoko’s been around long enough that they’ve already gone through an entire other cycle worth of remakes back in the 1990s. By then, the children who grew up in the 1970s watching superhero cartoons on Japanese television would now be adults keen on revisiting the entertainment icons of their youth, only with more sex and violence added into the mix. (To observe this equivalent phenomenon in America, look into the top selling titles from DC or Marvel comics.) The result was a variety of direct-to-video “OVA” revival projects in which the classic heroes were dusted off for another adventure, only this time there’s bloody murder and the girl sidekick character is DEFINITELY going topless at some point, and that point is probably in the first episode.

Perhaps it says something about the quality and longevity of these OVAs to note that twenty years later when Tatsunoko vs Capcom was made, the studio opted to reuse the 1970s TV designs for their characters instead of the more relatively modernized OVA redesigns. The key exception is Tekkaman Blade, but I’ll set that aside as it might warrant its own review at some point. Tatsunoko certainly wasn’t the only studio invested in remaking their older series at the time, but the interesting thing is that a substantial number of these OVA remakes ended up being released in America even though we often never got the original show. 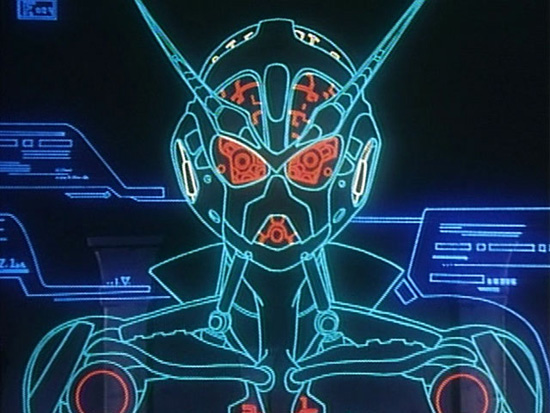 That was how in the mid-1990s I ended up seeing Casshan: Robot Hunter, a four-part direct to video remake of the 1973 television series Shinzo Ningen Casshan (“Neo-Human Casshan”). In an era before DVDs existed a significant amount of anime was still sold dub-only in edited form in the United States, and per the modus operandi of then-publisher Streamline Pictures, the four episodes of Casshan were edited together to make a “feature-length movie.” I hate this practice. A regular movie has a beginning, middle, and end whereas these sorts of “movies” begin and end every 20-30 minutes. But as both Streamline Pictures and Manga Video understood, you can sell a “movie” to a cable television network much easier than you can sell a “4-episode series.” That’s part of why Casshan: Robot Hunter was one of the many mainstays of the Sci-Fi Channel’s weekly anime block that emerged after a few years of “Anime Week,” along with another violent OVA revival effort compiled into a movie, 8 Man After.

Being shown on a TV network that people are actually watching counts for a lot as far as people remembering the existence of something—I remain resolute that middle-of-the-road fare such as Outlaw Star or E.Y.E.S. of Mars would have been LONG forgotten otherwise—because years after Streamline Pictures went out of business, ADV Films released Casshan on DVD in the early 2000s. And now that ADV is [technically] no more, Discotek Media has rescued it yet again, opting to re-title it Casshan: Robot Hunter Casshern under their Eastern Star label. That title comes straight out of the Department of Redundancy Department because in the last few years, in the time between the Streamline/ADV releases and the present day, the powers that be have decided to start spelling the character’s name “Casshern” instead. Oddly enough, in the US release of Tatsunoko vs Capcom it’s still spelled “Casshan”! In an effort to circumvent the confusion and guarantee people could find this DVD release when doing searches, both spellings were worked into the title. It’s certainly true that “Casshern” more closely resembles how the Japanese say it, but I mentally associate that spelling with memories of a bunch of angsty people looking glum and talking a whole lot, as per the live-action Casshern film and recent Casshern Sins television series. So I’ll just stick with calling him “Casshan” since that was how the Japanese Romanized it when I first saw it. 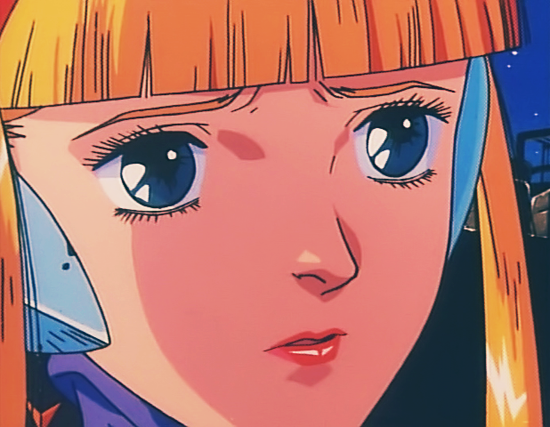 The general idea behind Casshan is yet another textbook case of why we need Old Glory Robot Insurance. The scientists made killer humanoid robots that turned against humanity because that’s what anime scientists and robots exist to DO, with the result being a war-torn Earth in which the human race is enslaved and systematically hunted by the metal evil. As if the gangs and the rap music weren’t bad enough. Leading the robots is BK-1, who is so megalomaniacal that he has rechristened himself the “Buraiking Boss” (or “Black King Boss” in the dub) and only bothers to clothe himself in a cape and a hat. When you’re both king AND boss, pants are optional. His minion subjects consist of various mechanical monstrosities, plus a few sexy lady robots for good measure because BK-1 truly believes he is following the directives of his creators. I don’t know about you, but it’s a perfectly reasonable assumption to make that the Japanese scientists who created him WANTED sexy humanoid lady robots. If you’re going to create a buff humanoid robot guy like BK-1 who doesn’t wear a whole lot, making the covers of Heavy Metal magazine a reality is clearly the next logical step.

Fulfillment of Sorayama aspirations aside, BK-1’s other directives pertain to preserving the environment because humanity with their wars and pollution are destroying the planet. Of course, the colossal amount of metal and oil required for building and fueling multiple continents worth of robot armies is no small ecological burden itself, but any dissent against Buraiking Boss is met with floggings or execution so we’d best let that pass. Listen: you can’t apply logic to this cartoon. The second you start asking “if the scientists intended for BK-1 to serve humanity and help save the trees, then why did they bother to install a giant laser beam in his mouth?” is the second you realize that marrying the logic of children’s entertainment to the desires for “mature” storytelling is likely to result in intellectual divorce. We the viewing audience just want robot violence and ladies in various states of undress, in that order of priority.

Thus, all we need concern ourselves with is that the only one whom the downtrodden believe can stand up to this post-apocalyptic tyranny is Casshan, an indestructible ninja robot who beats the bad guys using good ol’ Japanese karate and his transforming robot dog Friender. Any similarities to Rush from Mega Man are not coincidental. Our man Casshan needs no guns to get the job done, and when he grabs you with those metal arms to tear you in half vertically you can’t break free, because he’s made of metal and robots are strong. And yes, I do say that in every single review I write that has something to do with robots. Eventually, it’s revealed that Casshan does indeed have the ability to fire army-destroying energy beams. Why doesn’t he use this more than, say, once? We can only assume he enjoys his work. Besides, if he had a gun then his lady sidekick, Luna, would be totally useless! The 1970s are long gone, but even in the 1990s Luna continues to rock bowl cut bangs as she traverses the wastes in a swimsuit and shoots robots with her special “MF” ray gun. Apparently that’s short for “magnetic field.” Phooey. Did I mention you will definitely see Luna’s naked breasts? The box art serves as a helpful reminder of this fact. 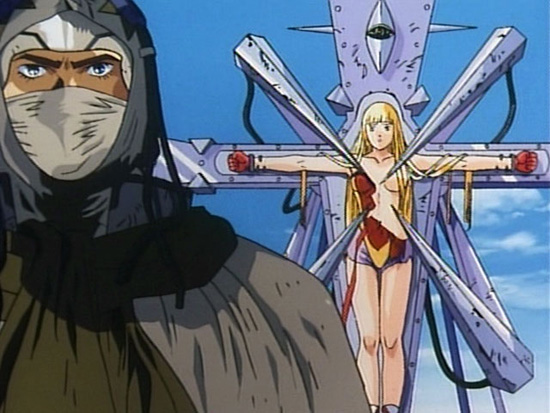 Where this guy Casshan came from is explained over the course of these four episodes, despite the fact that it’s not particularly different from that of the original television series which the intended viewing audience presumably knows about anyway. Heck, the opening narration is word-for-word identical to that of the original show, and they even got the same actor to deliver it! Ultimately, Casshan: Robot Hunter [Casshern] makes very little attempt to modernize the formula for a new era, and that’s probably for the best. In our latest issue, Evan Minto of Anigamers was less than enthused over the 2008 re-imagining Casshern Sins, which just wrapped up a late-night Adult Swim broadcast. I don’t dislike that show, but I also can’t blame him for doing so. I, too, would rather see our hero kicking butt over being sad that everyone he meets hates his guts and wants to devour said guts. The fundamental issue of contention with both that live-action movie and Casshern Sins is that they’re attempting to add emotional resonance to a series that is fundamentally about teaching kids that the way to quell disobedient killer robots is to either extend your arm straight through their chest or leap into the air and chop downward. That works for some people, and for others it REALLY doesn’t.

At the same time, the original premise lacks depth and that becomes apparent throughout the running time of this OVA. Casshan can’t really be hurt by his opposition, and the manner in which he summarily defeats them is very straightforward and workmanlike. There are some moments touching upon the nature of humanity and what constitutes a soul or sentience, but they’re not expanded upon. It could have been interesting to explore the notion of where and how robots whose programming is patterned after a living person diverges from said person, but to be honest my analysis of putting one’s mind into a robot body would be slightly less refined than Captain Murphy’s was in that one episode of Sealab 2021. 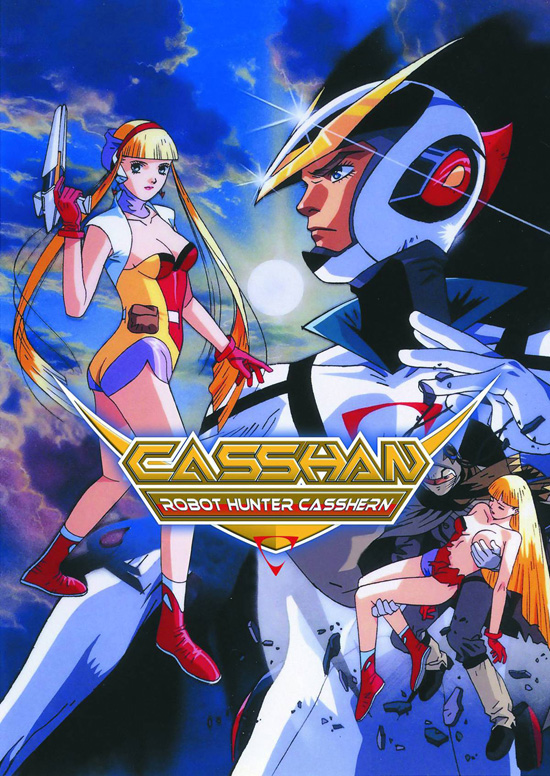 Like most Discotek / Eastern Star releases, Casshan: Robot Hunter Casshern is only about $15, so the fact that it’s the kind of outing best suited to watching at an anime club (I’d recommend one episode at a time rather than all at once) isn’t really that big of a deal. Especially when you consider that a whole lot of cartoon robots get TOTALLY WRECKED.