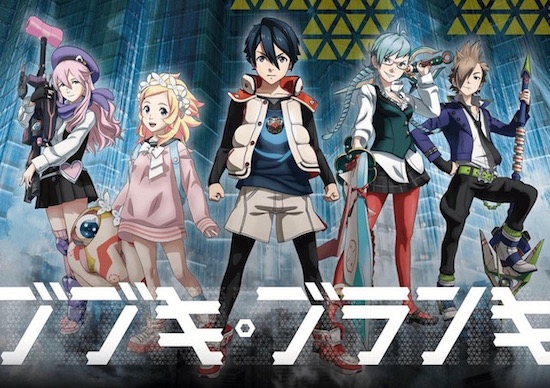 BBK/BRNK (pronounced Bubuki Buranki) is one of those shows you can guess a surprising amount of information about just by looking at a promotional image like the one above. Frankly, it’s not that impressive of a feat if you’ve been casually keeping up with anime in the last few years. It’s another anime set in a vague futuristic dystopia with bubblegum-colored high school students wielding over-designed and impractically large weapons as the heroes. That said, it wasn’t as bad as I expected.

While I wouldn’t call BBK/BRNK a bad anime, it just feels very bland. I’m really not interested in the characters because of the way they’re presented. The writers are trying to invoke the audience’s familiarity with different personality-types common in anime by making sure you instantly know what each character is like once they’re introduced. We’ve got the heart-of-gold dark-haired protagonist, the little sister (with a twist), the cocky villain that says “yare yare” every other scene, etc.

In the world of BBK/BRNK, there’s Earth and a world above it. In the world above, there are creatures known as Bubuki, who take humans as masters and are used as weapons. Then there’s Buranki, who are titan-like creatures that combine with four Bubuki to become even more powerful. Bubuki and Buranki have fallen to Earth in the past, and the protagonist Azuma Kazuki and his newfound friends are trying to free the world from the tyranny brought by the power of the Bubuki Entei (not to be confused with the Pokémon). The show doesn’t do a great job of explaining the story or the world, so it takes a few episodes to really get the basics down.

BBK/BRNK is another anime to come out in recent years to primarily use CGI. I’m glad more shows are doing this, but the way BBK/BRNK handled it really didn’t leave me impressed. Standing still it looks pretty decent. But for much of the time the actual animations remind me of cutscenes from 15-year-old JRPGs. I will say that despite not caring for the designs for almost everything in the show, I really do like the look of Bubuki Migi. A sentient giant right hand is much more interesting than a funky-looking spear or a gun with an eyeball.

This show isn’t bad, but I’d still say give it a pass. While it did seem to be getting better starting at episode 4, I really don’t expect the quality to go up tremendously. But if this show just happens to fall into your own pet genre, then it’s worth a watch. There are worse shows out there.

BBK/BRNK is currently streaming on Crunchyroll.