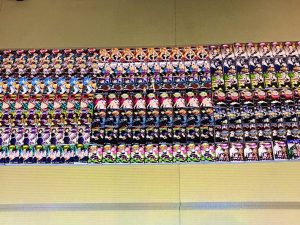 In September, a news story spread in Japan about 20 volumes of Demon Slayer being stolen from the bath house Mori no Onsen. The bathhouse’s response, which was to kindly ask on social media for the manga to be returned, made the story go viral. Readers at Otaku USA have been asking: were the stolen manga returned?

Unfortunately, there are no reports coming out that the thief returned those volumes. However, manga lovers from the community have come together and more than made up for the missing books.

According to Japanese site grape, the owner of the bathhouse found seven boxes of books in front of the business on October 2. By October 10, a whopping 190 volumes of Demon Slayer had been donated. The donations also came with letters, like one that read:

“Dear Onsen no Mori,
Pleased to make your acquaintance. I saw what happened on Twitter.
‘In an incomplete world, we need love rather than anger.’
This is one of my favorite sayings.
When the originals don’t come back to you, I hope we can all come together and join forces.”

What do you think of this outcome?