BanG Dream! isn’t afraid to chase the most far-fetched of dreams.

High school student Kasumi has been obsessed with stars all her life, chasing the feeling she had when she was a kid. She’s looking for, specifically, the “Star Beat,” or the exciting sound she heard one night while gazing at the stars. She’s a sprightly and approachable high school student, but there isn’t much she’s very good at. So when it comes to choosing a club at school, she doesn’t quite know where she fits in … until she happens upon the storage area of an old pawn shop and finds the guitar of her dreams.

When’s the last time you heard a song that made your heart race? Was it a single from your favorite band? Was it a song tied to an important event in your life? We’ve all been there, though for some of us those special moments lead to something even more amazing, like the realization that we too could put something special like a song or even our very own band together. 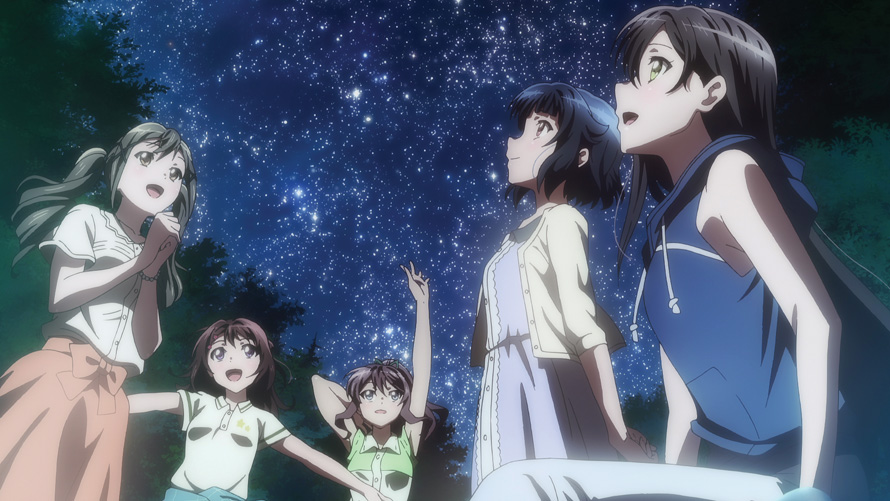 That’s what BanG Dream! imparts; a story about a girl who’s been searching what seems like her entire life for the same feeling that made her heart race when she was a child. If you’ve ever chased a dream (or thought about doing so), BanG Dream! is a show you’ll want to make some time in your schedule for.

From the beginning of BanG Dream!, which others will undoubtedly draw comparisons to music anime like K-On!, it’s clear that lead character Kasumi is an extremely cheerful person through and through, full of excitement for what some may see as relatively mundane things. She can’t wait to start high school, for one thing, bothering her older sister all night until it’s time to wake up for the entrance ceremony for new students. She’s quick to make new friends, especially with Saya Yamabuki, who works at a bakery. 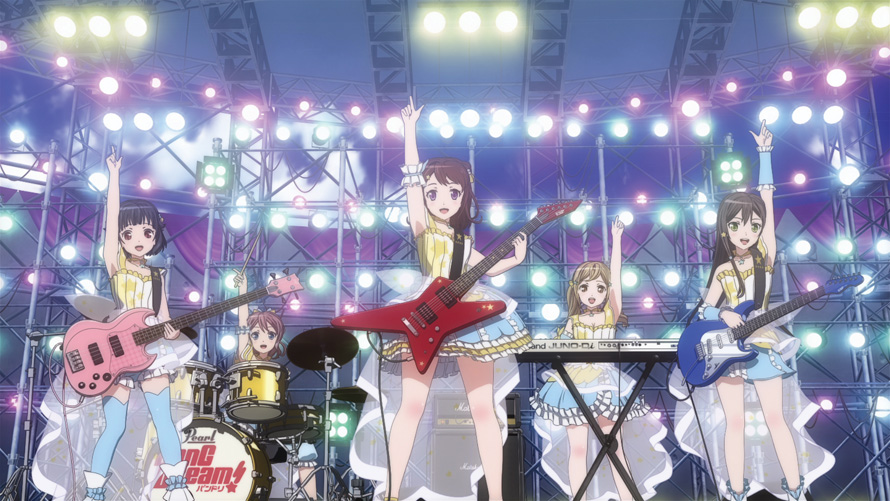 Kasumi’s spirits are always high, especially when she tries to figure out which club she wants to spend time with after school. When she happens upon some gold star stickers and it leads her to the pawn shop run out of Arisa Ichigaya’s house, it’s clear her fate’s about to change. Arisa is at the top of her class and is often at home instead of studying at school. The two meet, and Kasumi lays eyes upon the star-shaped guitar in Arisa’s home.

Kasumi’s crazy about the guitar, but she has no idea how to play it. She’s never played a note in her life but insists on taking the guitar somewhere to really test it out and put it through its paces. Eventually the girls land at a “live space” concert hall and ask to play on the stage, but only the bands deemed “good enough” to play there are allowed. As a result of this fateful meeting, Kasumi and company decide they’re going to start a band. That’s how the BanG Dream! comes to life. 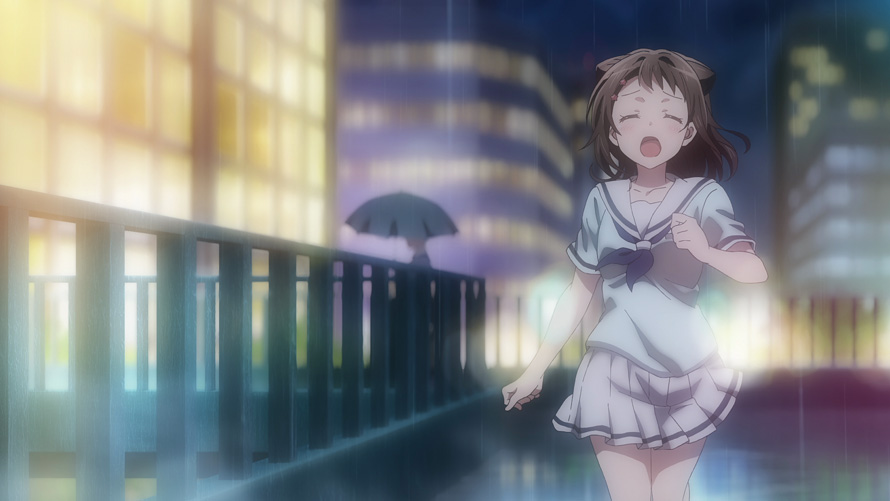 After Kasumi first sees a live band and gets it in her head that it’s certainly something she can do as well, she’s all about starting practice so she can play an instrument. Kasumi and Arisa work closely together after watching the band Glitter Green, and they eventually get Rimi Ushigome—one of the shyest girls in Kasumi’s class—to join them, and the band grows from there.

BanG Dream! is all about following your dreams and rock stardom, but it’s also about the camaraderie between friends that’s shown off consistently throughout the series. Arisa and Kasumi become very close, despite Kasumi’s original interest in the guitar Arisa has at the pawn shop. This turns into a real friendship that anyone can relate to going forward, especially seeing the girls so close during practice and overcoming the obstacle that they just aren’t that great at playing music to start with. 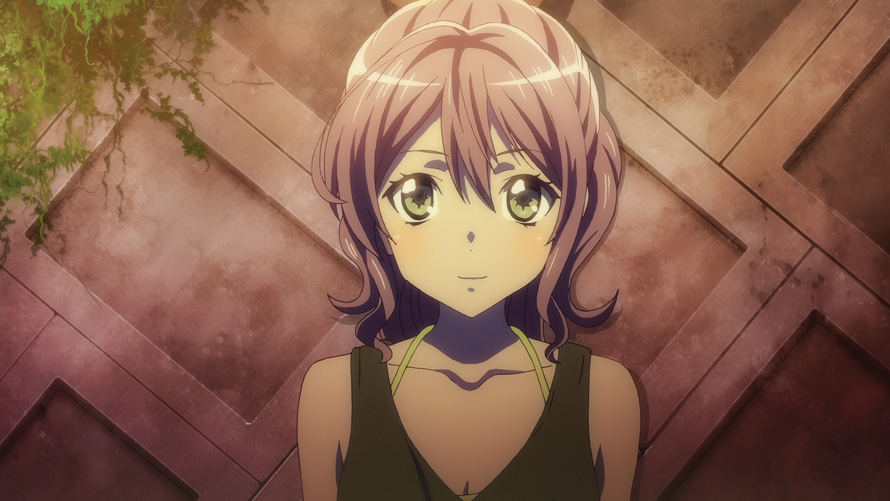 There’s a real determination to this series as a whole that’s not as present in other journeys to the top, and it’s infectious. You want the girls to succeed, no matter their shortcomings. Suddenly, while watching the band form into “Poppin’ Party,” you’re struck with the realization that this is something anyone could put together, if they wanted it badly enough. How many times have we seen someone doing something that we wanted to emulate, went out and bought all the supplies necessary to start doing it, and then gave up because we didn’t know what to do from there? Kasumi does the same thing here, only it actually works out for her, and thus you’re compelled to keep watching.

It may seem like BanG Dream! is a little like the idol side of anime, but that’s where it does differ. Most idol anime are all about curating the image of the singers and their personalities, but BanG Dream! is about starting from scratch and growing into the best version of yourself. That’s why it’s a much healthier, more exciting and raw show to get into with some of the cuteness of K-On!! mixed with raw enthusiasm. 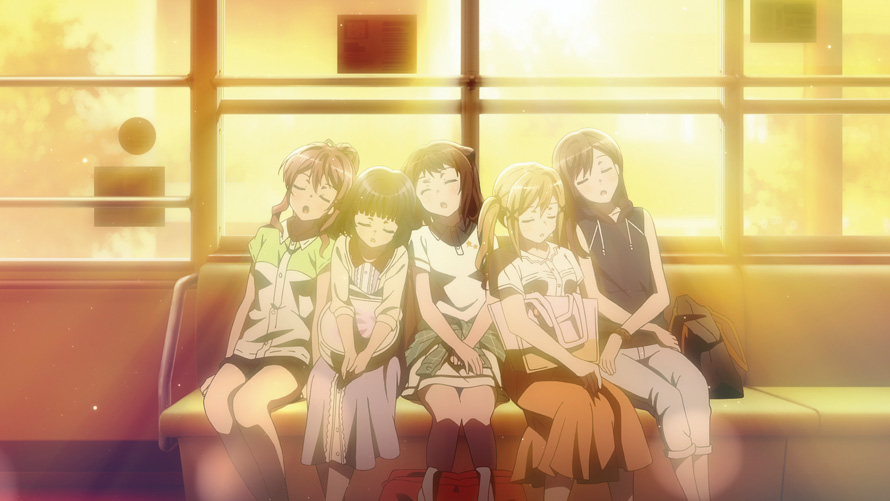 There’s nothing these girls are doing that you don’t also feel empowered to do, and so you jump up out of your seat to dance along with them. They could be your best friends, or the band from your high school that you cheered on to do great things. That’s part of what makes BanG Dream! so endearing to begin with, and what will likely keep you watching until the end. If you do choose to watch, just make sure you don’t run out of the house to go looking for a star-shaped guitar. You probably won’t find one as easily as Kasumi did.

BanG Dream! is currently available to stream on Crunchyroll, with a home video release on the way from Sentai Filmworks.