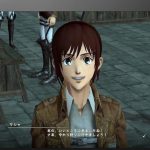 Koei Tecmo and Omega Force’s followup to the Attack on Titan game is coming to a handful of platforms, including PS4, Xbox One, PS Vita, Switch, and PC. While we won’t be getting the PS Vita version in the west, both it and the Switch version are on display in the latest promos.

First up, the Switch version:

Attack on Titan 2 launches in Japan on March 15, followed by North America and Europe on March 20.