Attack On Titan Teams Up With… Schick Razors?

About a year ago, we reported on the somewhat baffling collaboration between Evangelion 3.0 and… Schick razors? Yes, we all recoiled in horror at the sight of Shinji’s dad with a beaming smile and no facial hair, but now there’s a new threat in 2014: Schick x Attack on Titan.

Yes, that’s right. It’s time to shave the titans before they… well, they’re still going to consume you and your family in the most gruesome fashion imaginable, but they’re going to be doing it with immaculately shaven faces. It’s win-win!

Schick’s Japanese website put up a page promoting the collaboration and teasing a special event for June 9, but a promotional poster spotted by twitter user @KASUPI_zip gets right to the point: 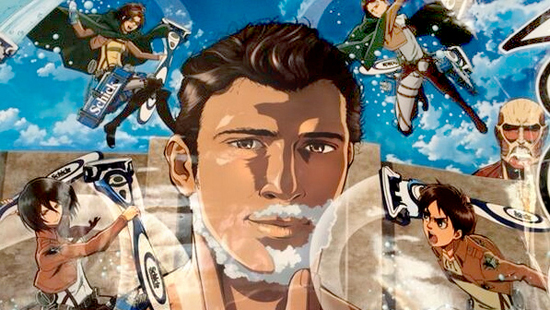 Beyond the date, Schick’s teaser site also asks a few extremely profound questions in its PR copy: “How has shaving with Schick changed the relationship between titans and humans?” My God. It’s like they knew exactly what I was wondering during every minute of Attack on Titan.

The site also promises some kind of “original movie” related to the collaboration, which we’ll be sure to report on when the time comes, if appropriate.