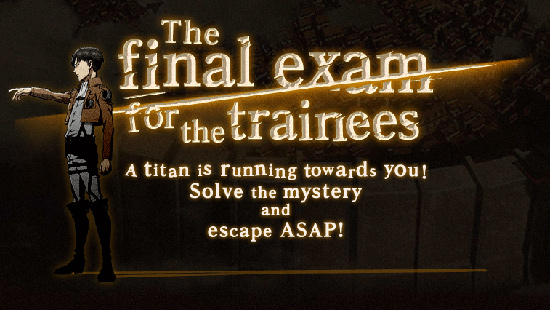 Those of you bummed out Attack on Titan is being cut from Toonami’s schedule might find some consolation in the fact you’ll soon be able to experience Titan for real – well, if you live in or around major cities, at least.

San Francisco will be the first American location for the Attack on Titan Real Escape Game, in which participants must solve a reportedly extremely difficult puzzle within a certain time limit – or be devoured by Titans. Or so we’ve heard.

We’ve reported on this Escape Game coming to the States before, but now there’s a trailer out for the US tour, which we’ve embedded below. The date for the New York premiere of the game has also been announced – April 11. Mark your calendars.

The Attack on Titan Real Escape Game, which has made its way around Japan and to Singapore, will open in a few locations around the States, including the aforementioned New York, San Francisco (Feb 1) and Los Angeles (March 21). Tickets run $30 for an advance ticket or $35 at the door.