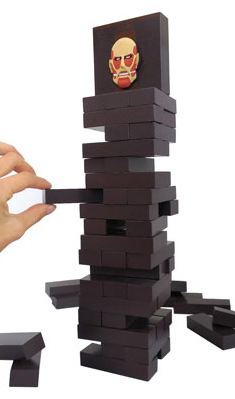 The explosive popularity of Attack on Titan has led to a lot of clever, occasionally brilliant promotions and merchandise. Check this one out, for example. Attack on Titan Jenga. (I mean Balance Wall, sorry.) Alright, I get it! You got a wall, you got a wall crumbling under attack by terrible giant monsters. It’s especially funny because we the players have to be the monster. They’ve got something going on here!

Actually… look at it, though. This is just a plain stack of black wooden blocks. Up top there’s a bigger one with a titan face molded onto it. And that’s it. They’ve called it a day at that. The set costs $65, and due to weight it’s probably going to cost more like $85 to ship to the US. A Jenga set currently costs $10 on Amazon. Some black paint and a sharpie with which to write “ATTACK ON TITAN” on the blocks will cost you three bucks more.

Behold the terrifying power of licensing in action… and sorry, the 3D Maneuver Gear USB drive is already sold out.

The Vault of Error: Attack of the Super Monsters
The JoJo Stardust Crusaders Ending Theme Is “Walk Like An Egyptian”